The whole is bigger than the sum of its parts

Aeromedical evacuation (AE) specialists from Germany, France, Spain, UK, Belgium and Luxembourg followed the invitation of Col Dr. Lothar Bressem, Head of the EATC Aeromedical Evacuation Control Center (AECC) to Eindhoven Air Base. The purpose of the meeting was to obtain a common picture of the AE-configurations that nations are looking at for the A400M, and to see in what way the A400M partner nations could enhance future interoperability while using the A400M for AE missions.

In 1917 some 30 miles south of El Arish on the Sinai Peninsula, British pilots for the first time loaded a wounded soldier onto their plane who had been wounded shortly before. Most probably nobody back then realized that this capability would one day become so important and essential for the military as well as the civilian world.

The AECC today is part of he EATC's Operational Division and staffed by Aeromedical Evacuation specialists (4 flight surgeons and 3 flight medics) coming out of the different EATC Participating Nations (PN). The branch is responsible for the coordination and the supervision of the evacuation of soldiers from anywhere in the world to their home country or to a safe place where better medical care is available. This type of evacuation is called Strategic Aeromedical Evacuation (StratAE) 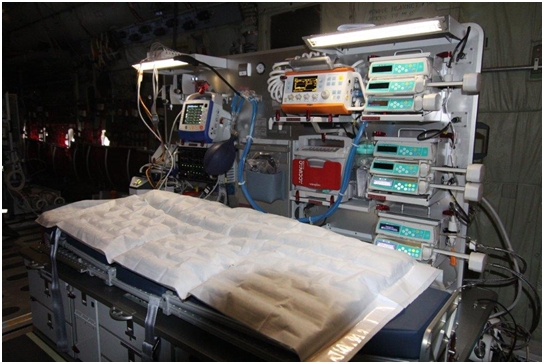 In 2013, the AECC managed the transport of 1307 patients. Patients have been repatriated from out of 90 countries all over the world, proving that StratAE is a worldwide mission.

Besides coordinating purely national StratAE-missions a main focus of the AECC belongs to cross-national StratAE-flights, meaning that a patient is transported by an aircraft of another nation. In this case the AE-crew will be augmented by an aeromedical crew member which speaks the same native language of the patient to be evacuated, in order to facilitate communication and to avoid misunderstanding caused by a potential language barrier.

AECC was able to increase the number of cross-national AE missions in the last four years. In 2013, 12% of the evacuations were cross national evacuations: due to the fact that the patient could be transported on an aircraft of another nation, he could reach his final destination between six and nine days earlier compared to a national AE mission in average.

But the aeromedical evacuation strategies and standards are evolving: While in the early days the aim of AE was to evacuate as many wounded soldiers as possible with only low or no medical care, nowadays AE-crews routinely move critically ill patients after they’ve already been stabilized or received damage-control surgery in theatre. During the following strategic AE flights, the AE-crew constantly monitors the patients’ vital parameters and is ready to intervene at any moment.

All these new developments of course have an influence on the aeromedical configuration of the A400M. 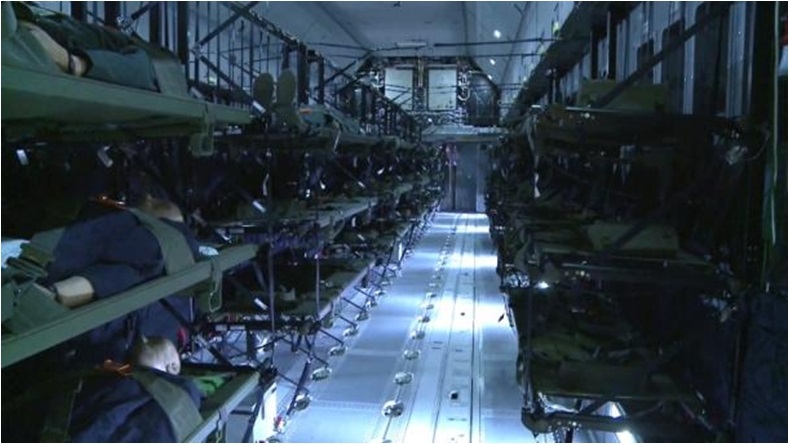 The first steps are done

In order to find a common approach and solutions for the best Aeromedical Evacuation with the A400M, AECC organized the above mentioned meeting.

The solutions presented by the nations prove that they have a lot in common. All participants agreed on the necessity of “care during flight” for high care patients and differentiate between medical equipment (including stretchers) for “High care” and “Low care”.

Most of the nations prefer a palletized stretcher support solution (stanchions for stretchers mounted on pallets) for the low care patients and palletized solutions also seem to be the preferred choice for the high care units (also called PTU – patient transport unit).

Pallets, which can be stored at the depot as one single part, are easy to mount on and remove from the aircraft, therefore gaining more flexibility. Moreover these pallets can also be used on other aircraft than the A400M … as long as they obtain the necessary airworthiness certification.

Airworthiness has in fact been identified as one of the big challenges to come: in fact finding a suitable solution for the transport and the treatment of the patient in flight is not enough, because the solution proposal has to be airworthy too, what means that - depending on the system - it has to resist a deceleration of 9 or 16G, which is quite a challenging constraint for most of the systems.

Finally the subject matter experts from the six countries agreed on the fact that cooperation seems especially prospective in the field of “Common AE doctrine”, “Common AE training” and “Common medical crew concept”.

These subjects will be discussed more into detail during the next A400M AE Meeting which is scheduled for the end of this year and hopefully will take place at Air Force Base BA123 in Orleans.