The future of European AAR

At the 10th of April 2014 the European Air-to-Air Refuelling Training - the first of its kind - celebrated its Distinguished Visitors Day (DVD). VIPs out of whole Europe found its way to Eindhoven Air Base in order to find out more about this EDA initiative, orchestrated with EATC assets and planning, conducted by the Eindhoven Air Base.

It was first Base Commander and Colonel von Soest to welcome his guests and to “prepare the floor” for the following speakers by introducing the VIPs and further guests into the programme.
Dutch Air Commodore Luyt took over and welcomed the audience on behalf of the Dutch Air Chief. In his welcome words he congratulated Eindhoven Air Base for its success within EART 2014 and remarked that the Netherlands - as a small country - have a comparably wide experience in Air-to-Air Refuelling matters. 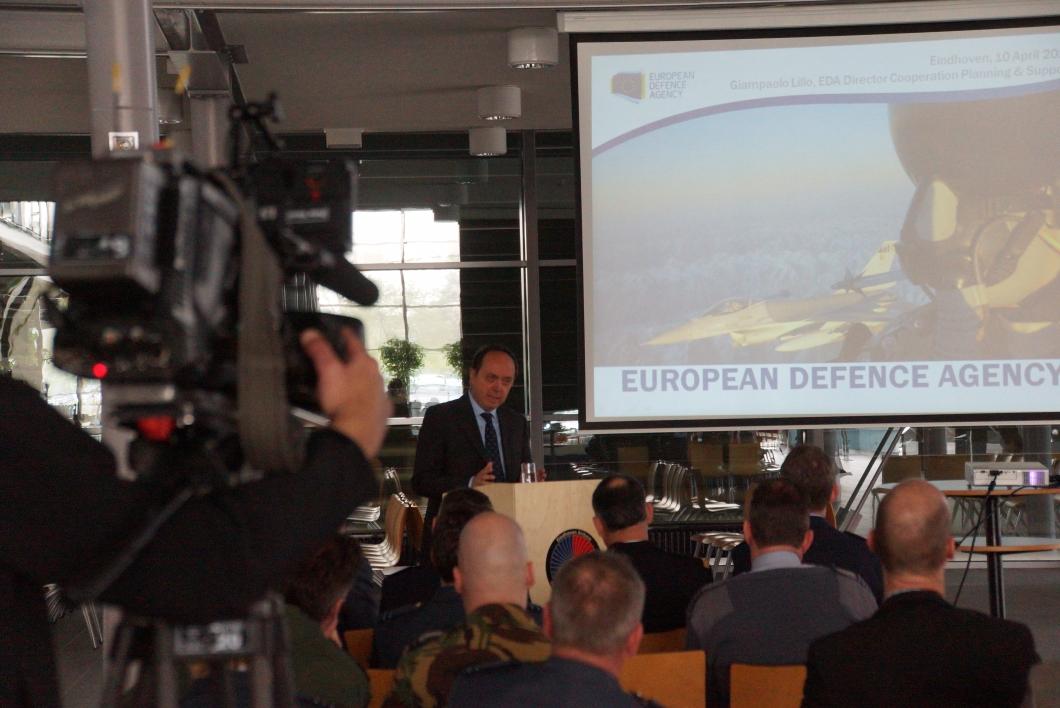 Giampaolo Lillo, EDA Director of Cooperation, Planning and Support, took the words to emphasize the necessity to overcome the EU Tanker shortfall. While the US - as a comparison - operate with more than 500 tankers, the EU works with rather than 50. Therefore EDA recommended to the nations four initiatives under one EDA umbrella that aims to remain Europes capabilitiy to assist worldwide remote airborne operations and deployments: with MRTT AAR solutions.
Major General Valentin, Commander of the EATC, described the European Air Transport Command as the heart and engine of the military Air Transport as well as Air-to-Air Refuelling within Europe. Though EATC runs actually just a dozen of tankers, this number will rise definitely with Spains accession this year and the potential accession of Italy the years after. With regard to the number of new MRTT aircraft, that France plans to introduce as well as the 29 AAR-kits for the A400M - while this aircraft will anyway been driven by the EATC under operational command - the amount of available tankers/MRTT can rise to more than fifty aircraft by the end of the decade - solely within EATC Participating Nations.
Colonel Lokman, as chairman of one EDA initiated important pillar to overcome the EU tanker shortfall, took now the floor and explained several strategies to fulfill the “Optimisation of existing assets and organizations”, answered afterwards the journalists questions, why and how the EART training was created for. He emphasized the need of a concept of better use of current and future TT assets and focused also on the establishment of a European AAR planners course. As a direct result, representatives of the JAPCC within the delegation announced, that this course will take place in the near future.
The long term search for the ultimate future MRTT aircraft was again Colonel van Soests responsibility. “His” project - also an EDA pillar - combines the need of not less than ten European nations to enhance their AAR-capabilities. Nations signed in 2012 already a letter of intent (LOI) to acquire a new MRTT aircraft by end of this decade/ beginning next decade. 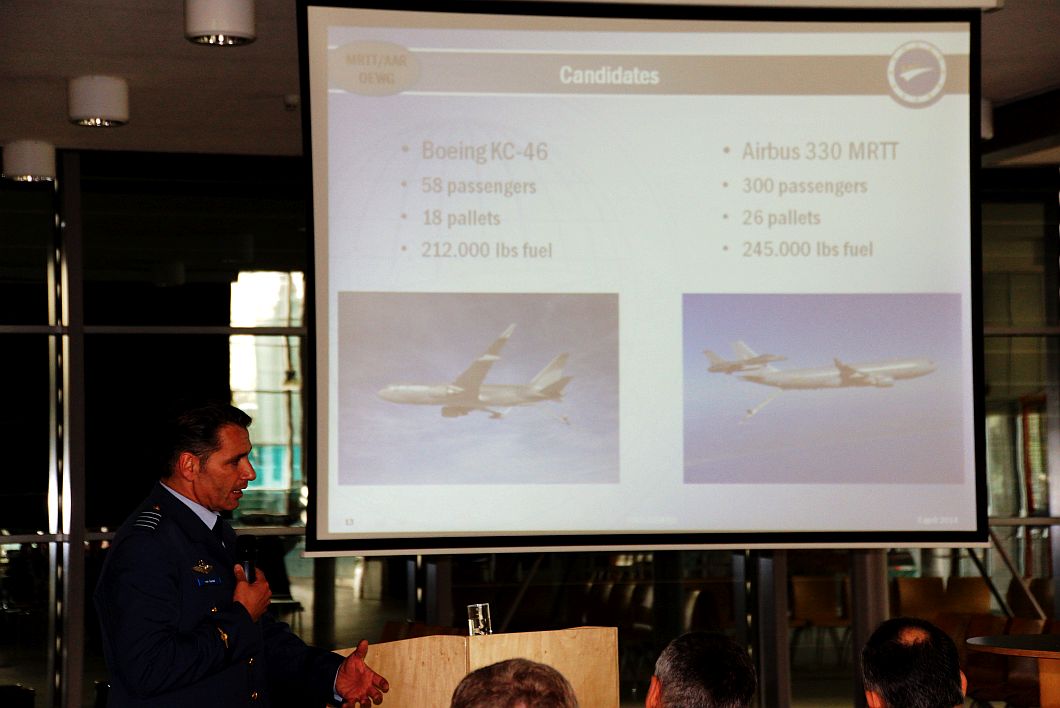 EART in theory and praxis

Finally it was Major Frölichs turn on the stage, Exercise Director of EART and surely also the focal person between EART and Frisian Flag. He introduced the audience into the training objectives and mentioned the advantages to merge both training and exercise. As both locations (Air Base Leeuwarden and Eindhoven Air Base) are not far away from each other, the tanker formations of the Dutch, German and Italian AAR-fleet were able to operate two missions a day within the exercise, making the whole sequence of AAR-actions very efficient. No wonder, that he recommends to repeat EART next year – again with connection to Frisian Flag.
After this marathon of speakers and speeches the event turned over to the practical part: Meanwhile all tankers were back from their first (morning) missions – and presented each a static display for the audience out on the tanker platform.
As final part of the DVD the guests took part in an AAR-mission within the Dutch KDC-10, where the astonished audience watched several F-16 aircraft approaching to be supplied. Moreover the German and Italian Tanker performed several formation maneuvers along the KDC-10, making the scenario the first of its kind within European skies.

FInd out more about EART here