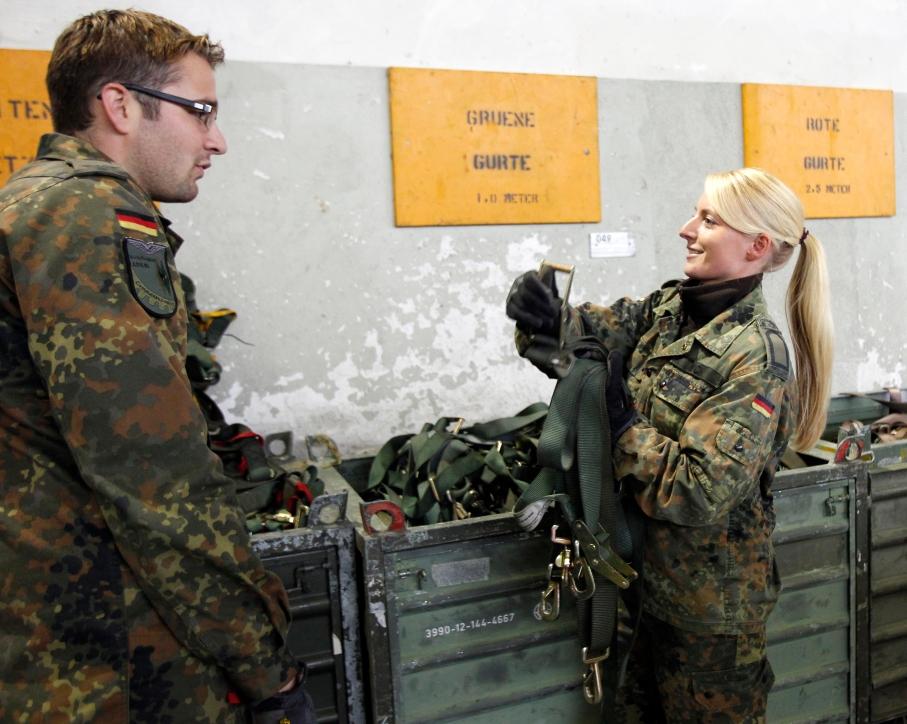 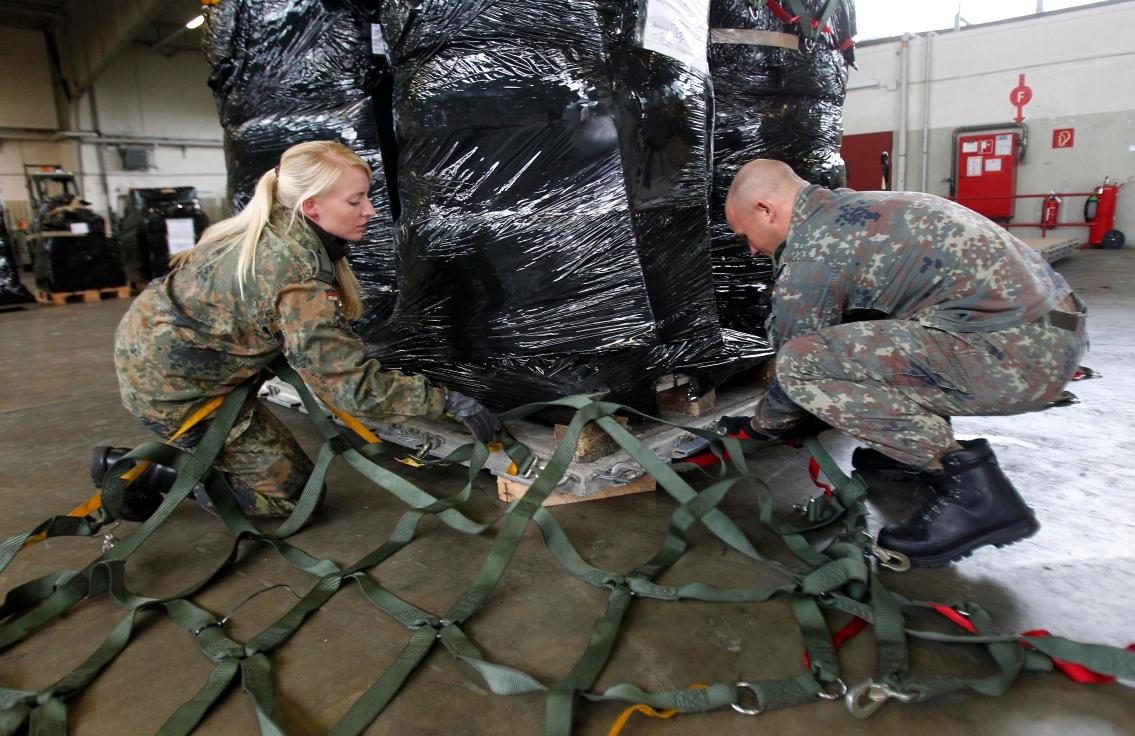 ... Bunk beds, white, spring-supported, were the trusted companions of thousands of soldiers, especially for cold and wet bivouac nights in the field. For some time these beds are not part of the standard Bundeswehr furniture anymore. A couple of years ago furniture items in the so-called "beech finish"- style were replaced by the colorful "Olympia"- series by the German armed forces. The good old bedsteads are now tied down at the cargo air terminal operation (CATO) of German Air Transport Wing 61 (ATW 61).

The logistics hub of the German Air Force for the Balkan mission (KFOR) is located at the Bavarian Air Base Landsberg/Penzing – and its soldiers transfer extraordinary material to destinations all over the world. One of them is air movement supervisor and Sergeant (Sgt) Vanessa Koch from the ATW 61.

"The beds are shipped to Senegal," explains Sergeant Vanessa Koch, “because the German Armed Forces have been involved in military training assistance in Senegal for several years, where soldiers of the German Army engineer school train soldiers of Senegal in some fields of pioneer activities.”
Koch is serving in her CATO-team since 2006.
A relative of hers told her once about the Bundeswehr, says the 26-year-old sergeant. And this relative, who is stationed at Penzing as flight mechanic on the C-160 Transall transport aircraft, showed her some areas of the ATW 61. "However, for me this place was the most interesting area," utters Sgt Koch with a smile before proceeding to the next HCU – heavy cargo unit pallet, a standard air cargo transshipment pallet with a size of four meters by four meters. 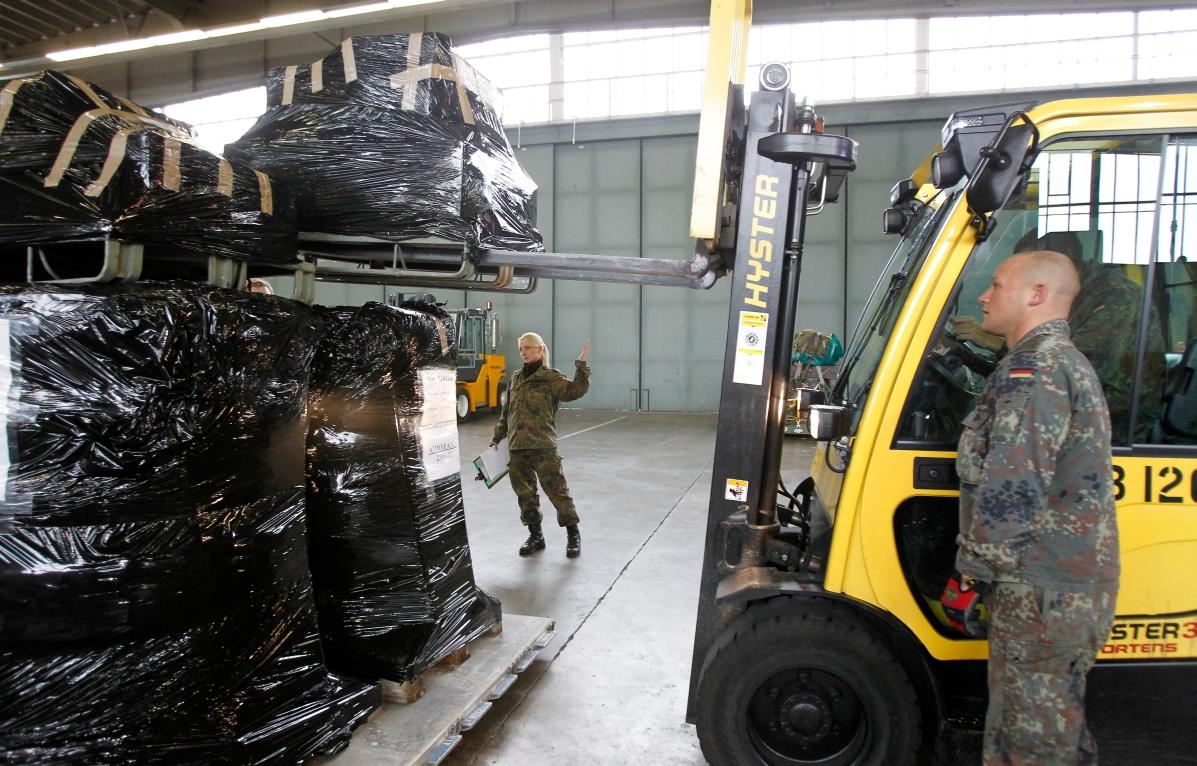 On this pallet, the items are stacked evenly as high as the loading ramp permits , which is up to a maximum height of three meters. Subsequently, nets are placed over the cargo items and tied down onto the bottom so that an evenly packed pallet is produced.
Sgt Koch directs her soldiers to various places around the HCU. All together they tie down the net simultaneously on all sides. This has to be done carefully, because an item coming lose in the air could turn into a dangerous projectile. Similar to other transport vehicles, securing the load has the highest priority.
With a brief eye contact Sgt Koch beckons the operator of the Mulag LT 10 pallet- transporter to get started. The operator climbs into the vehicle and begins to lift the HCU – a task that requires some experience, as the LT 10 has a width of more than four meters. But the soldier steers the large vehicle easily through the hangar. A few minutes later, the cargo is on its way to the Transall aircraft and disappears into “the belly of the trusted workhorse”: The C-160D cargo bay.
Meanwhile, Sgt Koch has worked together with her cargo personnel on the other pallets, as time is pressing because the aircraft flying to North German Air Base at Hohn is ready. From Hohn, the cargo will be taken to the West African country of Senegal, together with additional freight, to assist the MINUSMA mission for the ECOWAS troops.
For Sgt Koch moving all kinds of cargo has become routine especially since she gained experience in two tours of duty abroad with ISAF in Afghanistan. This year for example she served with the operational wing in Mazar-e Sharif and at the strategic air transport base in Termez, Uzbekistan. Moreover, she supported exercises in Malta, in France and in the United Kingdom. "These are formative experiences," explains the sergeant from Bad Reichenhall with a smile. 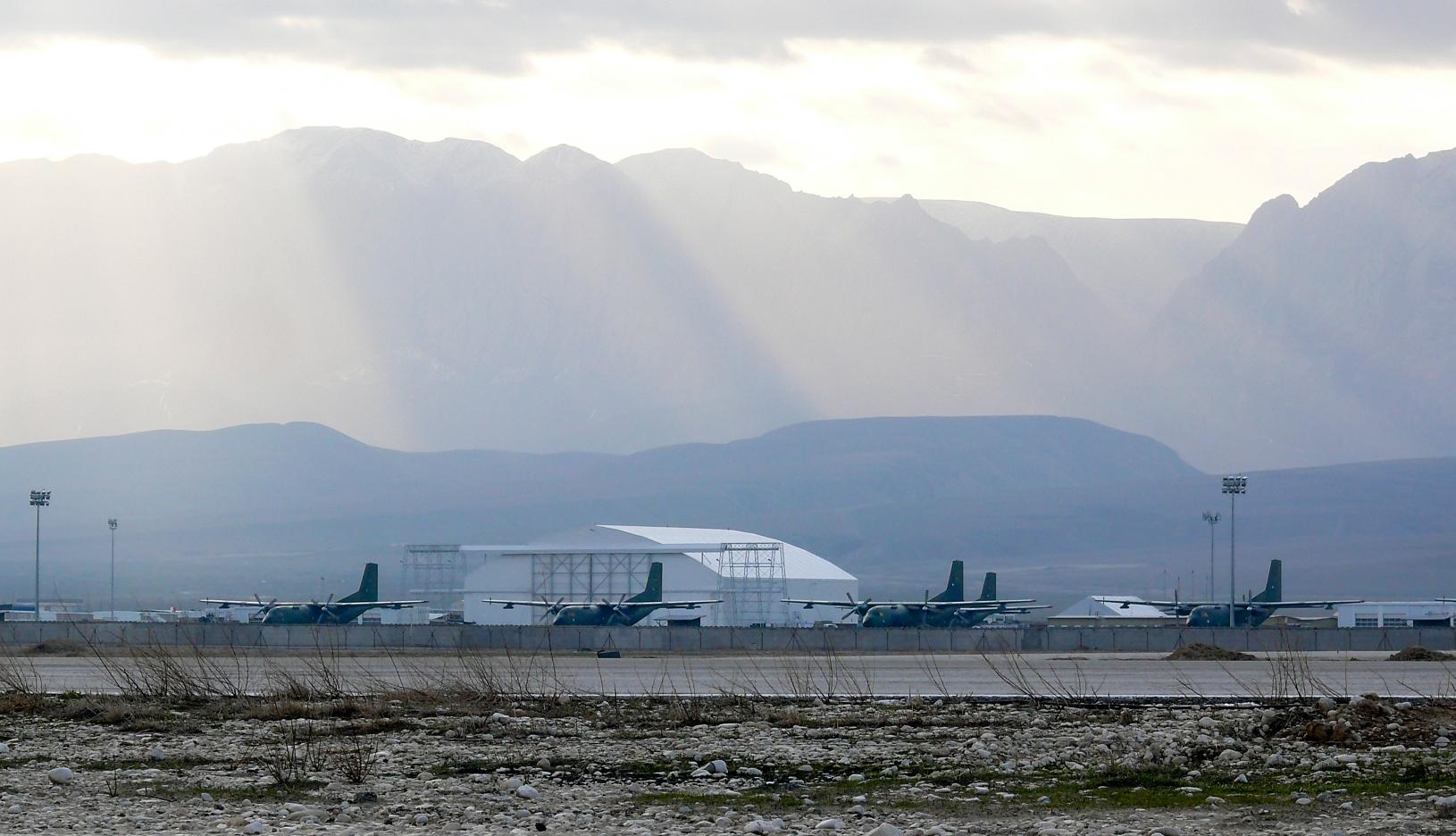 She never wanted to have an office job, she explains, but she still had to undergo part of the training in an office, because her civilian occupational training and employment was that of a logistics manager. But today she acts much more in practical areas and really moves things, that multiply her own weight by far: “After a day's work at this job you know what you have done”, says Sgt Koch. Particularly during missions abroad the workload is very high since two or three transport aircrafts arrive each day to bring material from Germany to the Hindukush. "You certainly don’t need a physical workout in the evening," emphasizes Sgt Koch.

Since the runway at Mazar-e Sharif has been extended and upgraded a couple of years ago, even the huge Antonov An-124 transport aircraft can land near the Bundeswehr base of Region Command North. In addition, there is the domestic Afghan air traffic between the individual garrisons and bases of the other nations in the east, south and west - and finally the flights to and from the capital of Kabul. These transport aircraft rarely carry only passengers; mostly, they are cargo transporters. Their cargo unloading needed to be organized by our protagonist while on mission.

In the afternoon, Sgt Koch and the soldiers of the her team have finished their work. “When mission contingents are rotating, however, there are days when the work will last until the evening or even into the night”, explains the sergeant, “although - in such cases - the personnel works in several shifts.”
But for today her job is done: The first aircraft of the next day will start to the Kosovo at eight o'clock in the morning, which is the weekly routine flight to the Balkan state. The material is ready and will be loaded in the typical early-morning fog at this time of the year.
The bunk beds are still standing in a corner of the hangar ready for their transport to West Africa - and while these words are written, Sgt Koch is again on a four month lasting assignment at Mazar-e Sharif. 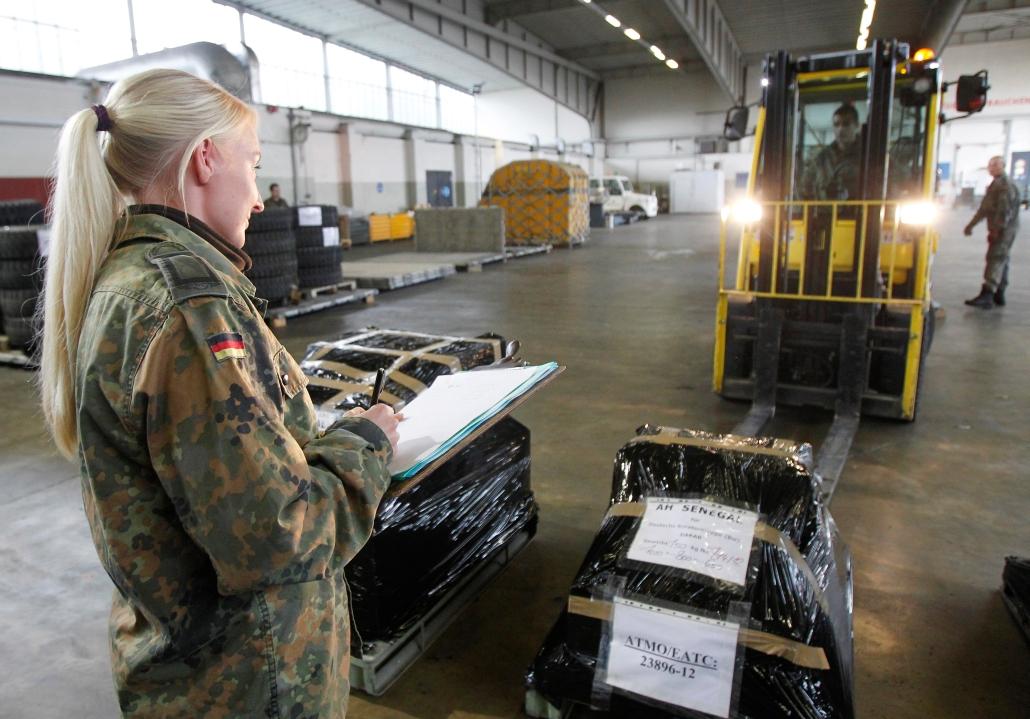