MEAT 3.0 is released into the EATC Participating Nations

The multi-user software MEAT – short for “Management of European Air Transport” – was designed “in  house” to support the processes of military air transport activities and Air-to-Air Refuelling within the EATC and its Participating Nations (PNs). Currently, the application is used by 4.000 users across the PNs.

Released in EATC PNs during the second half of October, MEAT 3.0 is a redesign of the software interface and the technical implementation needed for the future development of new functionalities. It is a web-based application which provides for a smoother and more performing software, not requiring any pre-installed software on the many workstations. The user experience is significantly enhanced.

The migration to MEAT 3.0 occurred in the PNs during the last couple of weeks and is now complete and fully effective. The Change Request System in place includes the participation of operators from the EATC as well as from the PNs, so that the direction, quantity and quality as well as the most needed prioritization of software changes are done in  multilateral agreement and the spirit of multinational cooperation.


The software consists of seven main modules supporting the military air transport request, planning and tasking cycle and of the mission controlling function. Catalogues containing additional data for the modules are also accessible through the software. They are used at every level in the air transport process and provide information about airfields, aircraft types, transferred aircraft, airbase locations, flying units, call signs, possible status of assets, etc.

The development of MEAT is a continuous process and our team of software designers and developers will continue to work at the further growth of the interface and enhancement of the user experience.

MEAT – “One software to combine the military Air Transport” 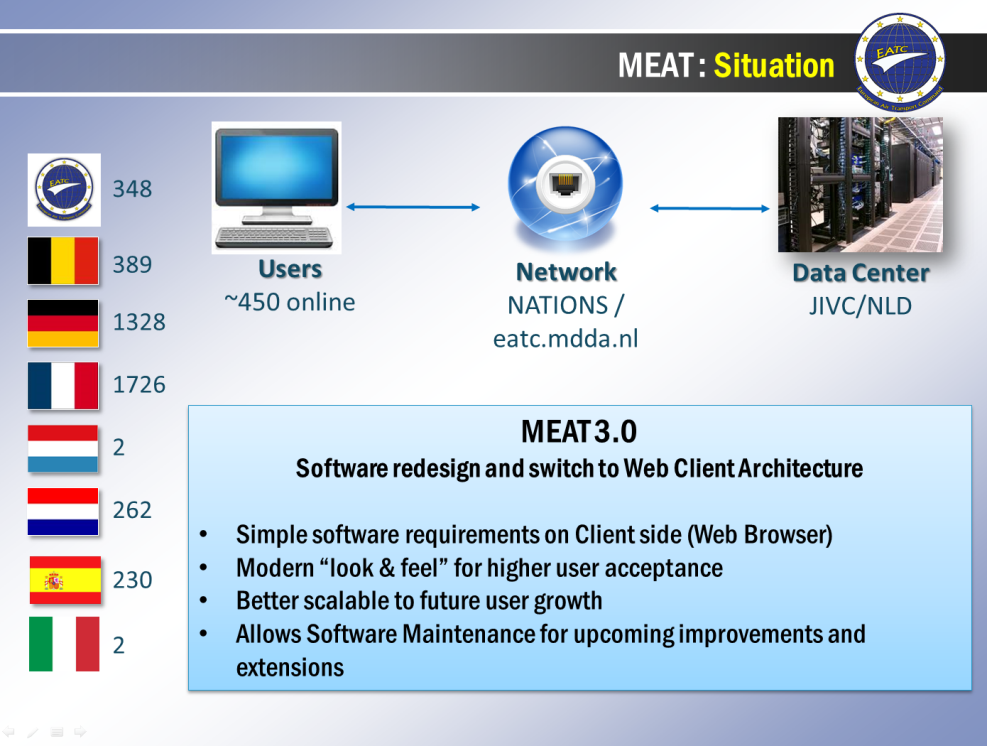