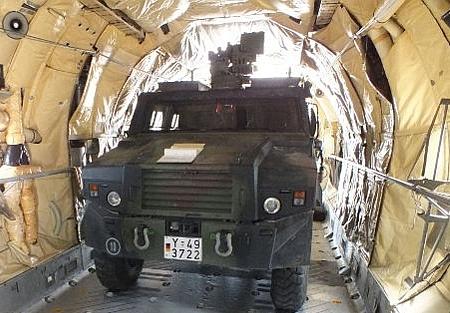 Monday 07 July 2014, the most modern armored vehicle of the German Air Forces - the Eagle IV - was to fit into a Transall aircraft. As part of the exercise United Endeavour 2014 and in cooperation with EATC assigned Air Transport 61 (ATW 61) in Landsberg/Penzing, the soldiers of the ATW 61 had the task to manage the vehicle into the cargobay - for the first time.

In a mission the 245 horsepower Eagle is used as command- and multipurpose vehicle. It can carry up to five people and protect them from various threats such as traps, mines, direct fire or NBC warfare.