In August this year, Lieutenant Gilles Van Dyck has had his swearing-in ceremony in presence of the Luxembourgish minister of defense Jean-Marie Halsdorf. He is now the second pilot of the Luxembourgish armed forces. In 2019 he will then get his own plane – an Airbus A400M. Until then, the young pilot will fly on a C130 of the Belgian Air Component.

The day after his swearing-in ceremony we talked to Gilles Van Dyck and asked him, what one has to do to become a pilot in the Luxembourgish armed forces and how the A400M will be used.

“Already during the secondary school I dreamt to become one day a pilot” tells us the young officer.

Van Dyck has been born the 19th of March 1983 and started his military career the 8th of August 2006. He graduated from the Royal Military Academy in Brussels with a Master in social and military sciences.

After that, he spent 10 months in Beauvechain (Belgium) flying a Marchetti SF-260 and another 10 months in Avord (France) flying on Xingu. So the military pilot has been studying and training for seven whole years.

“I am very happy that I took the decision to become a military pilot.  A military pilot covers a larger variety of missions than a pilot in a civilian company” so Van Dyck. “Together with our Belgian colleagues we will fly into various theater of operation. There our mission might be to drop material, transport troops to their operational area or drop paratroopers”.

Before the delivery of the military Airbus A400M in 2019, the Luxembourgish pilot will fly in a Belgian squadron. The Luxembourgish armed forces have an agreement with their Belgian colleagues which will allow Gilles to fly with a Belgian C-130 Hercules. 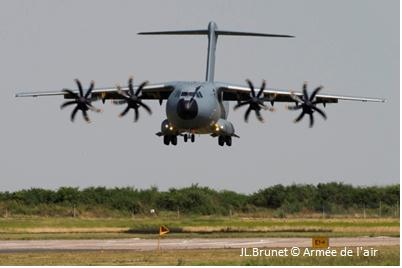 To be able to fly the C130H, Van Dyck has spent 5 weeks doing training on a full flight simulator at Tampa (USA). After that, he studied theoretical knowledge for two weeks in Brussels, before being trained, step by step, on real flying missions.

Contrary to the widespread public opinion, Luxembourg will pay all the costs for one A400M and Belgian will buy 7 more.

“One of the advantages of the new Airbus will be that beside the captain and the flying officer, no flight engineer will be needed. The new cockpit with its interfaces allows us to fly the plane with only two persons” explains Van Dyck. “And moreover, the plane will also facilitate the work of the loadmaster who is responsible for the correct loading of the cargo.”

After the delivery of the Luxembourgish A400M and the 7 Belgian ones, all these airplanes will be regrouped in a pool of 8 planes which will fly in the Bi-National-Unit based at Melsbroeck, the military part of Brussels international airport.

The crews, and even the single persons inside of a crew, will be mixed, the scope being to make literally no difference between a person coming out of one nation and the one coming out of the other. The final goal should be that two Luxembourgish pilots might fly in a Belgian airplane, while a Belgian captain flies the Luxembourgish one.

While waiting for a new start of the MNU the Luxembourgish and Belgian airplanes will be put under the operational command of the EATC. The EATC will improve the effectiveness and efficiency of the participants’ military air transport efforts by selecting the best available and most suitable asset to fulfill the missions of the EATC partner nations. This leads to less outsourcing, less empty space and additional training opportunities.