The RAF’s first Atlas, MSN015 is currently on the Final Assembly Line (FAL) and is very shortly due to make its first flight. It will then be painted with the RAF markings and roundels and is scheduled to be delivered to its new home at RAF Brize Norton in autumn this year. All pilots destined to fly "Atlas" will be initially trained and awarded their coveted RAF ‘wings’ by 45(R) Sqn, part of No 3 Flying Training School. The A400M will replace British C-130K Hercules and will provide an enhanced tactical and strategic capability to the RAF’s Air Mobility Fleet. Capable of carrying a 25-tonne payload over 2,000 nautical miles with the ability to land on short, unprepared landing strips, the aircraft will be used at the point of need in peace, crisis or conflict.

The RAF plans to introduce 22 A400M aircraft. The first aircraft for the RAF was moved under its own power for the first time on 10 August 2014 at the Airbus Defence and Space facility in Seville, Spain. It is scheduled to be delivered to the RAF in September this year. 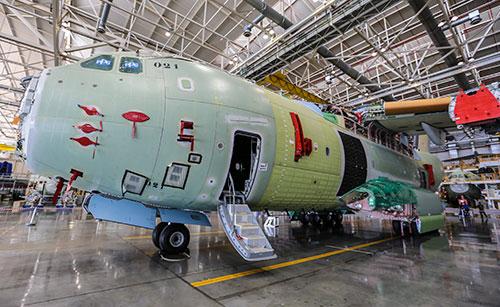