From Havana to Termez

The most used troop transporter in EATC service

The story of this extraordinary aircraft begins in the mid 80s. The former state airline of the German Democratic Republic - the "Interflug" - operated until then only aircraft from the former Soviet Union, most recently Illjuschin Il-62. This aircraft was so far the biggest within Interflug service though lacked on economical efficiency due to rising fuel costs and same time high own fuel consumption. By also not being able to meet with noise regulations at many western airports, the aircraft lost furthermore opportunities to gain profits back on a reasonable operational basis. Finally the Il-62 was not equipped for all weather conditions: Strategic distances e.g. to Cuba had sometimes to be carried out with a stopover at New Foundland, resulting sometimes in an escape of passengers deciding to flee into the western world - than rather to continue their flight to Havana.

Remarkable story of a remarkable aircraft
When finally turned out that the Soviet Union was not able to supply the GDR with sufficient modern passenger aircraft, the airline ordered three A310-304 from Airbus industries.
On 30 October 1989, the Airbus A310-304 with call sign “DDR-ABC” (from 1990 on: “D-AOAC”) entered its service in red and white colors – colors of Interflug. Together with two previously purchased aircraft of the same type, the GDR had made a bold and giant step in terms of modernizing its fleet, since these only a few months’ aged aircraft set standards with regard to its technical capabilities. To underline these remarkable efforts, the cargo hold of the aircraft had been fitted with additional two tanks in order to widen the aircrafts range capacity.
Moreover Interflug followed new business ways by temporarily “loaning” the aircraft also to commercial tour operators: in April 1990 the Airbus flew for the first time to Mallorca – being tool of a joint venture of Interflug and TUI - and in the winter of 1990 Interflug aircraft already flew every two weeks to Sri Lanka, having been officially chartered by a West Berlin tour operator. The GDR Airbus were now able to operate efficient, bringing back home the vital foreign exchange the bankrupt GDR  was always aiming at - until it turned out that the Interflug as a whole institution sustained with some thousand members to much personnel to survive a competitive situation against other commercial airlines: with just a pool of 20 aircraft running. Thus the liquidation of the sole state owned aviation institution became unstoppable…

Rising like phoenix from the ashes
But at least for the more profitable parts of the dissolved Interflug few economically feasible solutions survived: After the reunification of Germany many former Interflug jet airliners were purchased as a package and taken over by the German “Luftwaffe”, the former “class enemy”. The formal handover of three A310-304 was held on 01 May 1991. Thus for all three aircraft a truly new life had begun, while most taken over former soviet aircraft were taken out of GAF-service already within the 90s.
By that time the three A310-304 were already equipped with a so-called "glass cockpit"; computer screens and other digital components had found its way into the cockpit that was served only by two crew members. The aircraft was fitted with a new flight management system and three IRU (Inertial data unit – connected navigation instruments) enabling the crew to keep track of all flight-relevant data. The ECAM (Electronic Centralized Aircraft Monitoring), which monitors the performance of most aircraft systems, made the so far mandatory flight engineer obsolete, instead this system was now up to warn the crew when the limit of specific flight data was exceeded.
The term "glass cockpit" by the way refers to the use of cathode ray tube displays for most of the primary instruments in exchange of the old-fashioned "steam gauge" electromechanical instruments common inside most civil and military airliners until then. As a result there was from now on a "better aerial office" that featured simplified systems enabling the crew to reduce the workload associated with managing all airplanes’ systems while airborne.

A second chance within military service
With an additional conversion to fit military needs of the German Air Force for the long-distance flights (additional military navigation and communication systems ) the former passenger plane was registered on 16 September 1991 as “10 +23”, executing from now on missions for the Special Air Mission Wing MoD at Cologne-Wahn. At this time, the wing itself was not yet able to obtain own personnel for this new aircraft type. As an interim solution - and by special permission therefore - also the pilots and flight attendants of the dissolved Interflug were taken under temporary contract. These days no one could imagine that these civil flight attendants had laid the foundation for further legal adjustments resolving possibly one decade later also into the opening of all military professions for women as female soldiers.
In a festive ceremony on the military section of the Cologne-Wahn airport (former) Minister of Defense Volker Rühe renamed on 2 October 1993 the aircraft 10+23 - meanwhile colored with a blue and black painted band - officially as "Kurt Schumacher", in remembrance of a famous German politician of the postwar era. The other two Airbus A310 received the name “Konrad Adenauer" (10+21) and "Theodor Heuss" (10+22), both intended to be used solely for VIP purposes.

Afghanistan Shuttle
The 10+23 received its final gray painting in 2004 during an industrial maintenance at Lufthansa AG in Hamburg. Until then the aircraft already had successfully performed its service as standard German passenger / troop transporter, hence the term as of A310 “Pax”.
Equipped like a usual civil airliner, the aircraft can carry up to 214 passengers, who are primarily German soldiers flown to the Bundeswehr’s remote areas of operation. Regularly the aircraft was and will be used in the light of whole mission contingents to be exchanged - thus for example flying to Pristina in Kosovo (KFOR) or to African Djibouti to deploy and bring back soldiers serving for the ATALANTA mission.
Well known within the German forces is the aircrafts service as so called "Afghanistan Shuttle”. Although supplying the ISAF mission with personnel, the aircraft does not really land at Mazar-i Sharif / Afghanistan but instead few hundred kilometers away at Termez / Uzbekistan: Every Tuesday and Friday - and every week - the A310 PAX operates from Cologne to Termez and back. The number of carried soldiers has meanwhile reached six-digit figures – with a record of more than 35.000 flying hours and over 9.400 landings so far.
Yet we have not even mentioned the aircrafts extraordinary flights in support of humanitarian relief and disaster striking – and what is relevant for EATC: the aircraft operates more and more flights also for soldiers of allied nations in the spirit of Pooling and Sharing.
One example: In former times  Germany, the Netherlands and Belgium would have gone airborne with one own aircraft to exchange their personnel at ISAF. Today it is more common that the Dutch and Belgian comrades enter Cologne military airport by bus or train. While only the 10+23 operates towards Afghanistan - with several nations’ soldiers on board - the other two aircraft are now spare for further missions - thus EATC saves resources and improves effective tasking of air transport means.

Picture of 2010: Both former GDR aircraft now in German Air Force colors and service at Cologne

Service around the planet
The Airbus A310 Pax has seen a lot places in its second life as troop transporter for the Special Air Mission Wing MoD: In the war between Ethiopia and Eritrea, the aircraft evacuated on 06 August 1998 the number of 212 people from Asmara, capital of Eritrea. In the face of the tsunami disaster on 26 December 2004 the aircraft carried in three missions more than 120 German soldiers to Banda Aceh (Indonesia) in order to build up a mobile rescue center. In September 2005, the A310 PAX carried 45 tons of combat rations into the devastated and flooded region that hurricane "Katrina" had left over to New Orleans /USA. The aircraft was also leading in the evacuation of German- and other EU citizens during the outbreak of war in Lebanon July 2006. Supported by the 10+21 and 10+24 the three aircraft operated 10 missions out of airports from Damascus (Syria), Adana (Turkey) and Larnaca (Cyprus), thus saving a total of 1.750 people from misery.

An operational end of service for the German A310 Pax is not yet in sight. Meanwhile the aircraft can witness the phasing out of its two “sisters” - VIP Airbus 10+21 and 10+22. Instead the A310 Pax in some way reached a further step - now as most used troop transporter of the EATC - since the aircraft was handed over to EATC OPCON few months after EATCs inauguration in September 2010.

But compared to other transport means in the military air transport world, this AIrbus is not that old to necessarily become replaced on a midterm scale. The same time the “order book” of the 10+23 is full: None of the other four A310 MRTT is as often used as the A310 Pax – which today faces its 25th anniversary on 30 October 2014...

Find the German version within the MoD "Y" magazine. 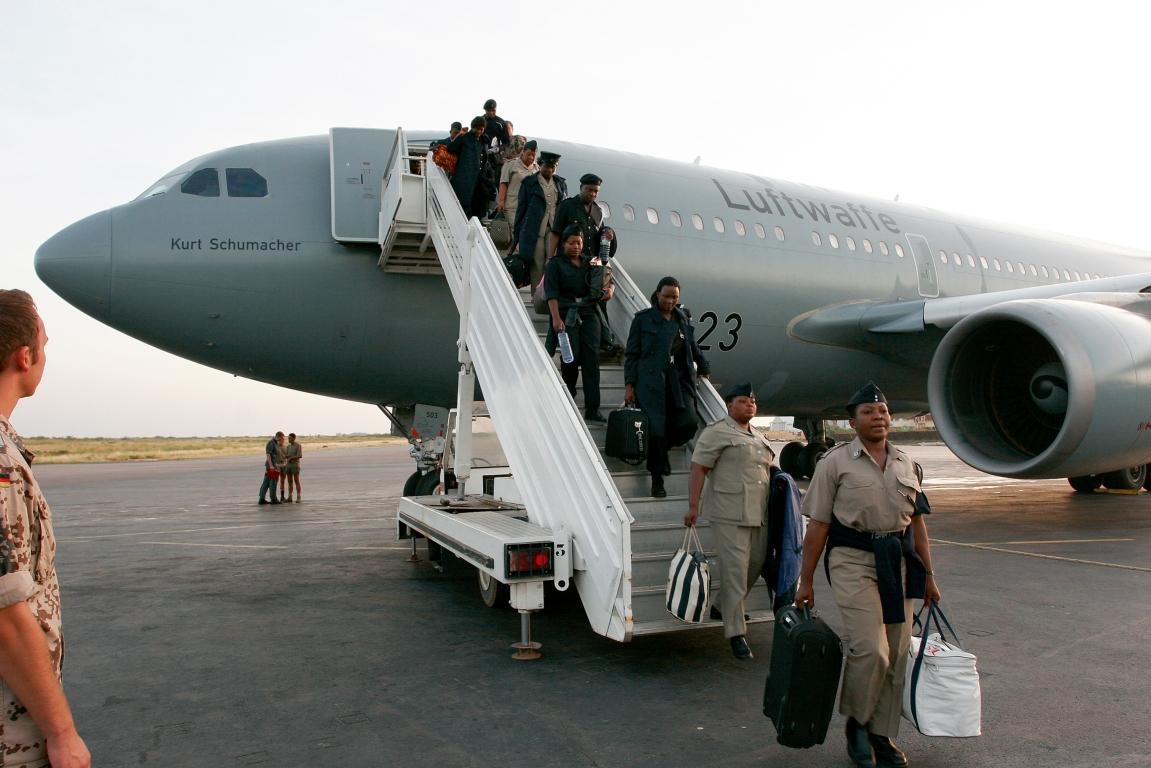