Second rotation of a French A340 to Kurdistan-Iraq

On 13 August 2014 a French A340 deployed 20 tons of emergency equipment/ relief material to provide humanitarian support to displaced civilian populations in Iraqi/Kurdistan. The aircraft was an RTOA from EATC to France.
This second mission of the French Forces aimed at deploying essential goods over to Northern Iraq where a serious humanitarian situation has developed. To achieve that goal an effective cooperation between the different players – personnel of Airport Roissy-Charles de Gaulle, logistics teams of air transit services of the French Air Force in Paris (DITAP) and Transport Squadron Estérel – was needed to handle this mission with the responsiveness the situation required. The aircraft was loaded with a water treatment and water distribution station of 12.5 tons able to provide water for up to 50.000 people, 600 cooking kits, 60 tents and 3.5 tons of medical supplies.

The A340 landed in Erbil around 15h30 local and the supplies were successfully delivered to the crisis centre of the Ministry of Foreign affairs and international development (MINAEDI) in charge of distributing the humanitarian goods to local authorities and representatives of non-governmental organizations, such as the Red Cross.
A first similar operation was carried out on 10 August 2014 during which a French A340 deployed 18 tons of humanitarian freight composed of medical supplies, blankets and tents.
Those two missions occurred only five days after French President François Hollande confirmed France’s intention to support the local populations of Northern Iraq, first victims of the conflict in the Islamic state and who are currently facing life-threatening conditions. 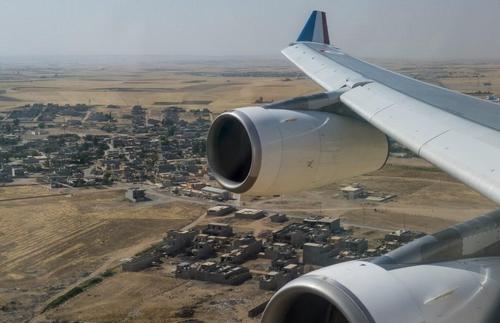