Additional troops and material to Mali and Senegal

On behalf of the EATC, a German A310 MRTT (Multirole Transport Tanker) from the Special Mission Air Wing MoD in Cologne-Wahn landed on Sunday noon in Bamako (Mali) in order to supply personell and goods for the European Training Mission in Mali (EUTM). Among others German Army soldiers went off board as part of the EUTM Mission and foreseen as experts to train African soldiers in pioneering skills. With this knowledge the local troops shall be enabled to serve independently on pioneering projects.

Once refueled and unloaded, the A 310 took off again two hours later to continue its mission. In Dakar (Senegal) it dropped off additional personnel and equipment for the German AFISMA-mission contingent, prior to return with German soldiers on board nonstop back to Cologne-Wahn.

This flight may be a good example how effective EATC plans its missions: The procedure  allows to resupply goods and to ensure a troop rotation in different theaters during only one mission. By adding several air transport requests (ATR) into only one mission EATC avoids so called “empty legs” - a flight without goods on board - and acts therewith "as efficient as possible – and effective as needed." 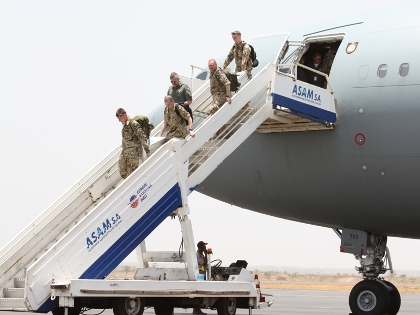