With a last wide turn over Eindhoven Air Base the Dutch Air Force (RNLAF) DC-10 finally left the Netherlands towards its last destination Newquay (United Kingdom), where the aircraft will be dismantled at last – while some of the spare parts will be used to service the left over two KDC-10 aircraft.
The DC-10 (T-255) flew assets for the European Air Transport Command (EATC) at same Eindhoven Air Base since 25 November 2010 - and ended its service for the EATC by first day of 2014.
The Dutch Air Force bought the single DC-10 in 2004 for strategic air transport matters. The former United Airlines aircraft was rebuild for military use and got a new cockpit in 2011 equipped with digital apparatuses, new cablework and a new floor within the cargobay.
This “loss” is also consequence of the EATCs successful work. With regard to also usable German Airbus A310 MRTT or  French A340/A310 for strategic air transport, a situation arose where the Netherlands could afford to give the aircraft away now - while EATC compensates the loss with other strategic aircraft assets of the EATC Participating Nations. Nevertheless: It was planned since 2011 by the Dutch government to set the aircraft out of service.
While its last two years in EATC service the aircraft conducted a total of 135 assets.

Words and picture above: Norbert Thomas
Picture below taken by RNLAF media

Picture of the past: the Dutch DC-10 (first in front of the formation) left its Eindhoven Home Base last weeks Friday. 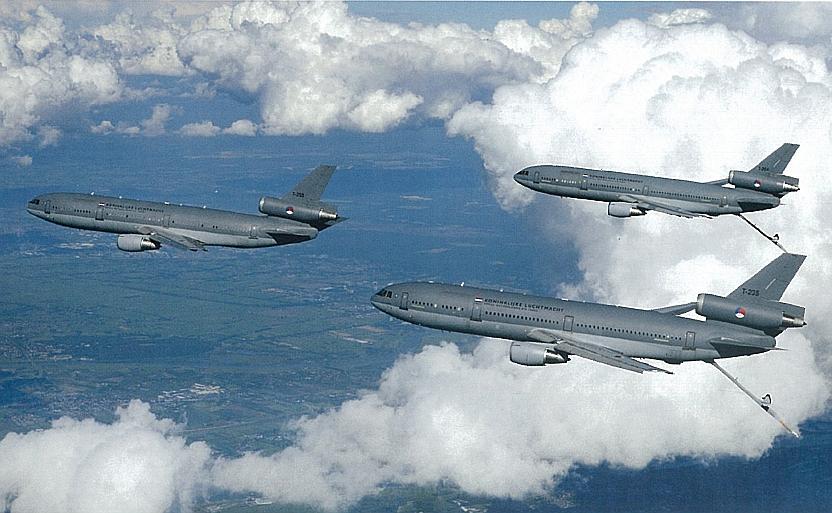