Ambulance in the air

Beside the two branches “Tasking” and “Mission Control”, a third entity is part of the EATC`s Operational Division: the Aeromedical Evacuation Control Center - or short: AECC.

This center, staffed by doctors (flight surgeons) coming out of the different EATC Participating Nations, is responsible for the coordination and the supervision of the evacuation of injured personnel from anywhere in the world to his home country or to a place where better medical care is available. In 2012, the EATC AECC supervised the transport of 1155 casualties. The reasons to perform Aeromedical Evacuation (AE) can go from battle injury (4% of the performed evacuations in 2012) to a simple disease (28% of the performed evacuations in 2012). 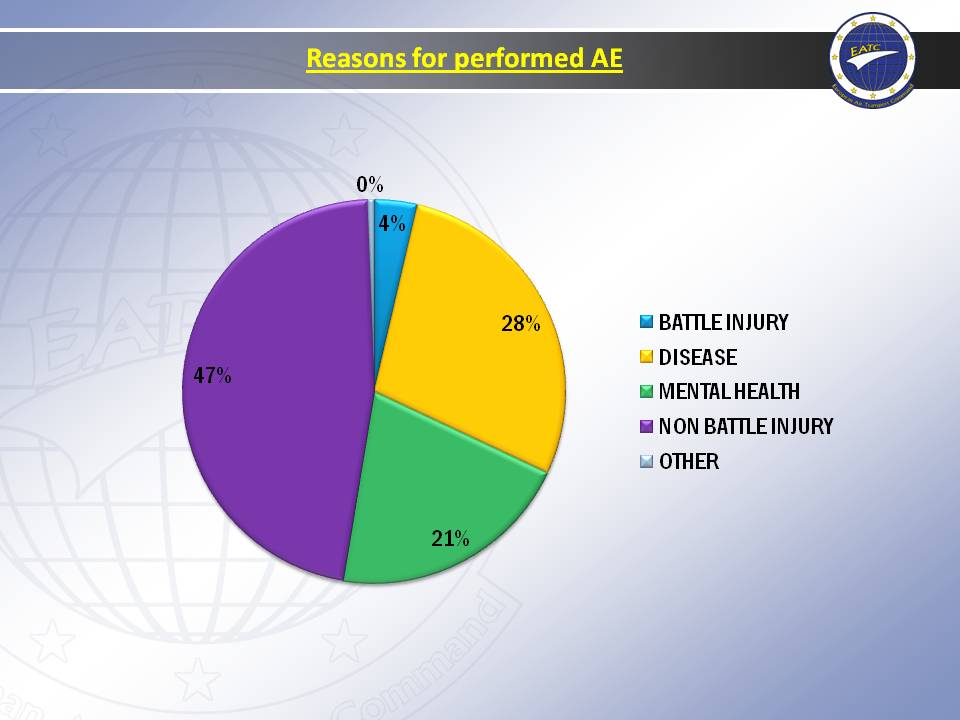 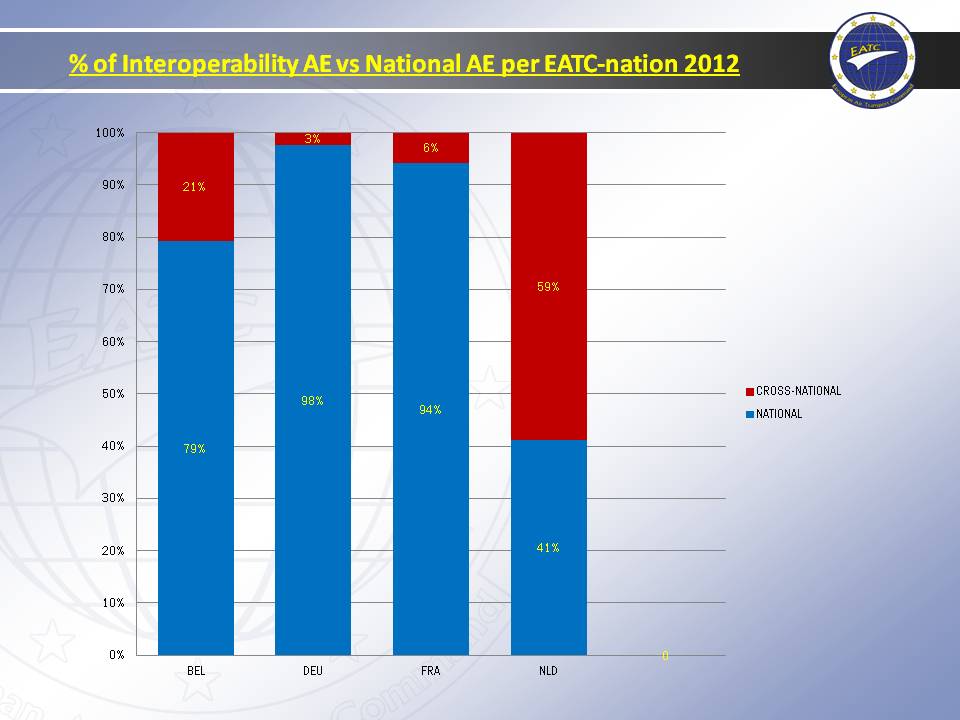 The scope of the AECC is to provide synergistic effects by repatriating patients in cross-national flights. So at the beginning of July a French paratrooper with a broken ankle could be repatriated from eastern Germany on board of a German airplane, with a German pilot and a German loadmaster. Only one French nurse took part in the flight.

The above table displays in red numbers the percentage of patients from the four EATC-nations repatriated on a cross-national flight proving the outstanding synergistic effects and new potential arising from the cooperation.

But the EATC AECC not only coordinates evacuations of patients coming out of the five EATC-nations. In April 2013 e.g., a German Airbus A310MRTT of the Special Air Mission Wing MoD with AE equipment on board started towards Amman (Jordan), where injured Syrian people have been gathered in several hospitals in order to prepare them for better medical treatment in Germany.

With the patients on board, the Airbus departed from Amman back to Germany. In order to release patients to German hospitals the aircraft landed at the airports of Stuttgart, Cologne, Hamburg and Berlin. Another C-160 was provided to fly additional patients from Cologne to Wittmund.

So the EATC AECC has to deal with evacuations all over the world, what can explain why the strategic AE is a worldwide challenge.

In order to provide the best service to the injured customer, the EATC AECC can task the assets coming out of the different EATC Partner nations. Depending of the type of injury, a PTU (patient transport unit for high care) or a simple stretcher can be used for the evacuation. 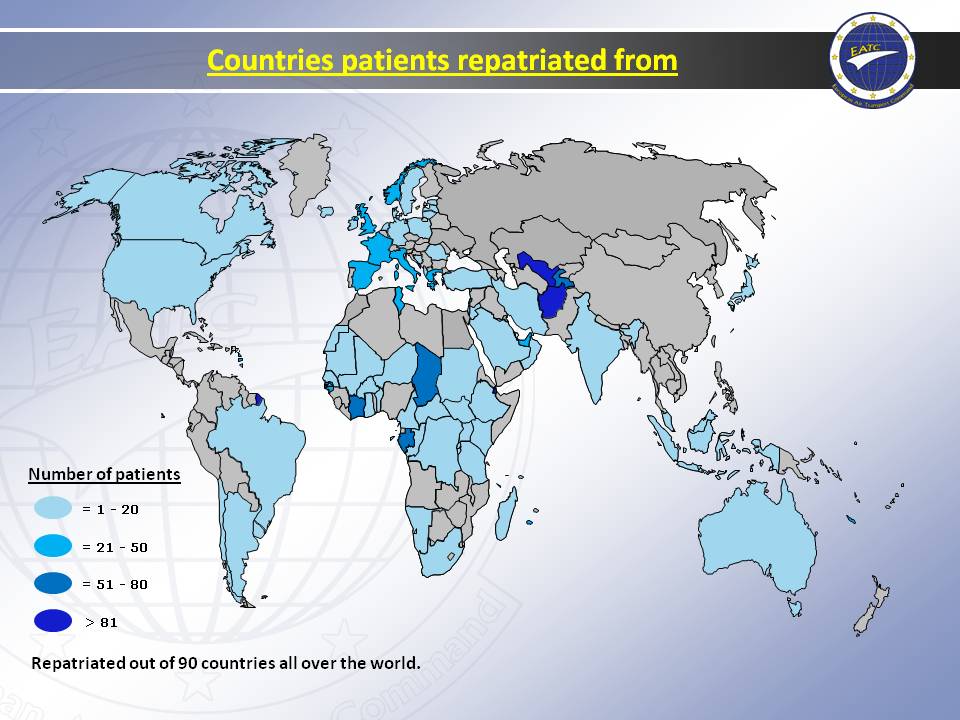 Service for the patients

MedEvac aircraft in AECC use remain part of the EATC assigned national air transport wings within the EATC Participating Nations - although the specific asset is being conducted by EATC.

Additional national aircrafts (e.g. the German Airbus A319 CJ or the French KC 135), which are also accessible on AECC request, complete a MedEvac fleet that is capable of nearly every emergency situation. The availability for a national aircraft is normally granted, as long as there is no national urgent caveat.

Meanwhile some of the aircraft in AECC use for MedEvac purposes are placed in a - more or less - steady changing process, e.g. older tactical acting Transall are being replaced in future by the also tactical used A400M, featuring more range capacity and velocity. Other aircraft like e.g. the German Airbus A 310 MRTT remain “state of the art” in Aeromedical Evacuation and will stay in service for at least another decade. 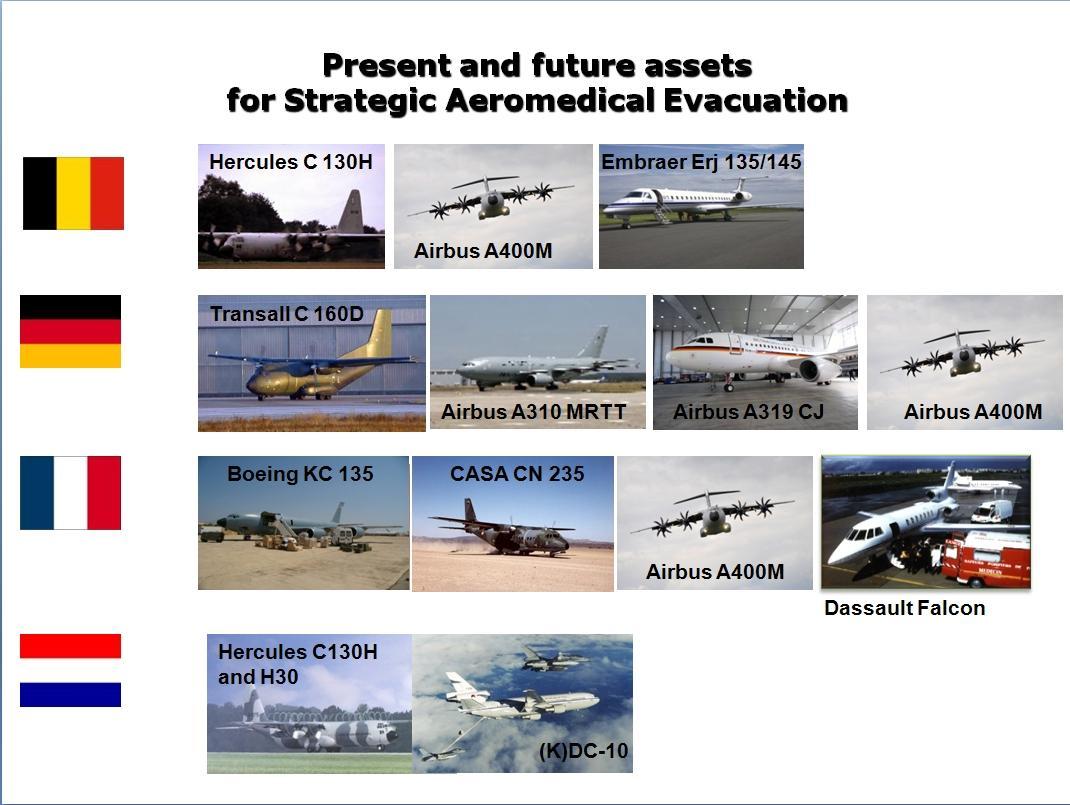