Against the EU tanker shortfall

During the NATO-lead operation UNIFIED PROTECOR over Libya in 2011, which was - in terms of air-to-air refuelling (AAR) - very much depending on the United States Air Force’s assets, it became evident that there is a critical capability shortfall in regard to AAR - especially within the European Union member states (MS),
To make matters even worse, the United States Air Force plans to move major parts of its AT fleet from the European towards the South East Asian theatre. This will include also AAR assets, a potential resource European Nations were always able to lean on in the past.

European AAR capability gap
Air-to-air refuelling is becoming more and more important for contemporary air operations. It is a force multiplier and ensures the effective deployment of forces as well as an efficient employment of expensive and scarce fighter aircraft within the theatre of operations. It could be argued that, today, MS are unable to contribute sufficient AAR assets to satisfy the capability goals for future operations: Only six MS contribute to the AAR capability today: France, Germany, Italy, Spain, the Netherlands and the United Kingdom. Their contribution makes up less than 30% of the agreed upon requirement of the 2010 headline goal. Some of those tankers are, for a variety of reasons, even not made available to the EU forces. Also, when taking a closer look at the current assets, it becomes apparent that the inventories of the MS feature quite a number of different aircraft types like the KC-135, KDC-10, A310 MRTT and Boeing 707. Those aircraft are equipped with different systems for fuel-delivery (boom or drogue) that are not always suitable for every receiver aircraft. In regard to interoperability not the most favourable situation, especially since the certification procedures of e.g. fighter aircraft to receive fuel from a foreign nation’s tanker are complicated and sometimes very time consuming. The situation becomes even more critical when considering that the AAR fleets of the MS are, in parts, reaching the end of their lifetime cycles. This often is accompanied by a decreasing availability rate due to their maintenance status. To sum it up: This capability shortfall could potentially have a very significant negative impact upon any EU-led operation. 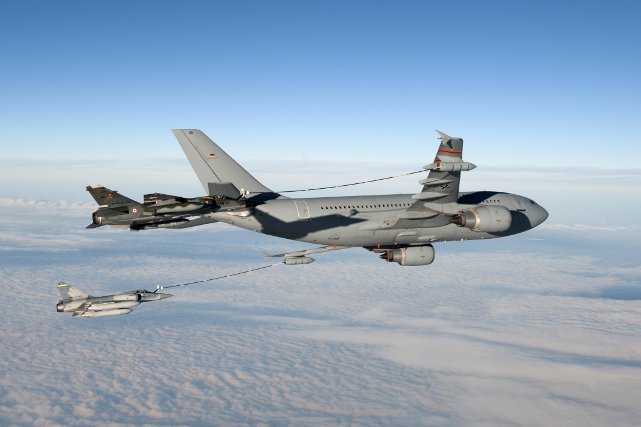 “Project Team AAR”
Step by step MS have taken first actions to overcome this capability gap: The first step was to identify and verbalise that there actually is a deficit. The European Ministers of Defence did this on 22 March 2012 by formally acknowledging that, within the MS, the domain of AAR is suffering from a critical capability shortfall, requiring a European solution. As a second step, based on this declaration and further discussions with the MS, the European Defence Agency (EDA) started in May 2012 an initiative to propose, to facilitate and to support opportunities that could mitigate this capability gap. Within this initiative, the “Project Team AAR” was established. It rests on four pillars:
-    Pillar 1 “Short Term Gap Filling” (lead by the EDA),
-    Pillar 2 “Optimisation of Existing Assets & Organisations”

(EATC, EDA, MCCE and Italy with EATC in the chairman position),
-    Pillar 3 “A400M Tanker Kits” (lead the by EDA) and last but not least
-    Pillar 4 “Strategic Tanker Capability” with the Netherlands in the lead.

The EATC’s role in pillar 2 of the “Project Team AAR” is to look into possibilities to optimise the use and the employment of existing AAR assets. To achieve this goal, a working group, the “Multi Role Transport Tanker (MRTT) and Air-to-Air Refueling Operational Employment Working Group” (MRTT/AAR OEWG), led by the EATC has been established in June 2012. EATC Participating Nations (PN), Italy, Poland, Spain and the UK are participating in the working group. Representatives of the European Air Group (EAG), the Movement Coordination Centre Europe (MCCE), the Joint Air Power Competence Centre (JAPCC) and the Military Staff of the European Union (EUMS) participate with an observer status. The objective of the MRTT/AAR OEWG is to harmonise and where necessary to develop procedures and related processes to efficiently and effectively employ existing and future multi-role AT-platforms in their dual AAR and AT-role. EATC focuses on the harmonisation of the current EATC AAR employment processes and will assess and recommend changes with respect to:

-  The transfer of authority over additional AAR assets,
-  Responsibilities and structure of the EATC AAR employment organisation,
-  MRTT/AAR planning and tasking procedures based on lessons identified and lessons learned with the current AAR capability and configuration change management (procedures to switch asset from AT into AAR-configuration).

In the mid- and long term the working group will focus on required and adapted employment procedures and processes with a view on the introduction of the A400M AAR-capable aircraft and other MRTTs. It will also support the EDA initiative on a pooled approach for A400M tanker-kits by investigating operational benefits. And finally, the working group will also support the EDA in the acquisition/pooled operation of a MRTT fleet by investigating the possible added operational value. 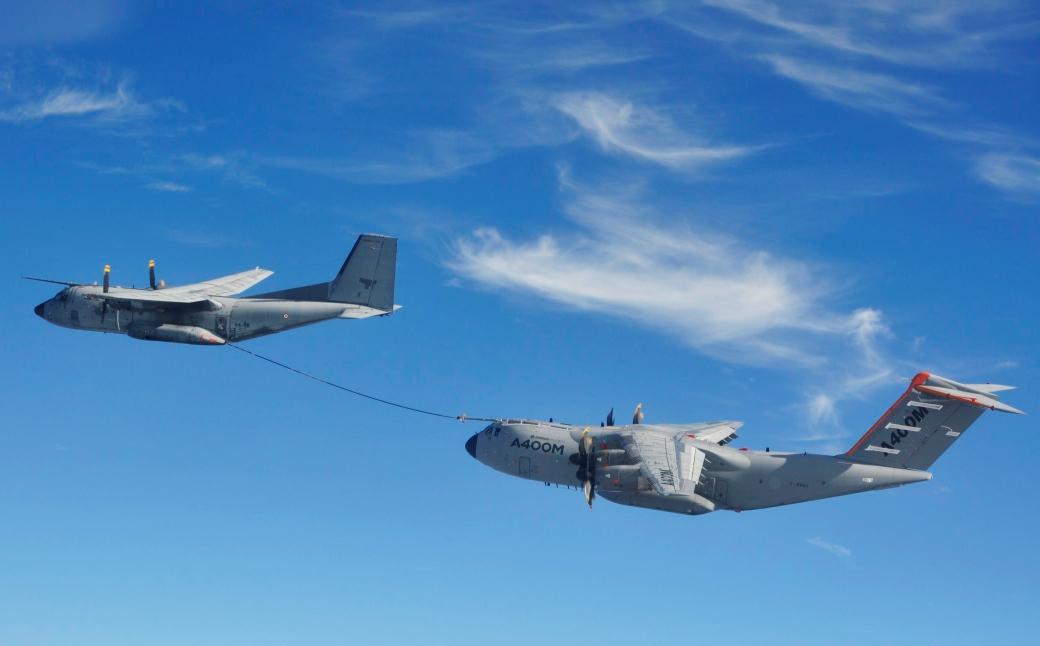 Preparing for future AAR requirements
As stated before, the EATC has the task to manage the employment of its assigned fleet, including AAR assets, as effectively and efficiently as possible. Currently one German Airbus A310 MRTT (in general two aircraft - not counting two further A310 MRTT right now in AirMedEvac configuration), four French C-160s and two Dutch KDC-10s are under the operational control (OPCON) of the EATC. Consequently the EATC needs to take care of the entire planning and tasking of the missions for these assets. Since the establishment of the EATC, the EATC organised more than 750 AAR missions so far, both training and ferry flights. Also, the amount of missions performed under the aegis of the EATC has increased. That is why the EATC will establish an AAR-cell, manned with dedicated specialist within the Operational Division of the EATC.

However, now and even more in the future the EATC needs to be involved as a facilitator. This includes being proactive in increasing the European interoperability of EATC Nations’ AAR assets as well as strengthening relations with the EATC Participating Nations (PN) and other military organisations dealing with AAR. As first measures the EATC will support EATC PN with the certification of their AAR assets for new aircraft types and will start a study and discussions with France regarding the possible transfer of operational control over their KC-135s to the EATC as well as increasing EATC’s interactions with the AAR-cell of the MCCE. 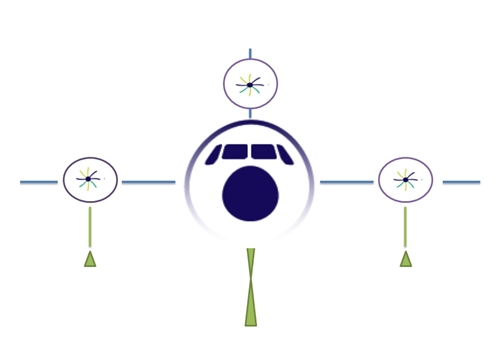 EART as a direct consequence
For the reason that interoperability is a prominent key factor in the EDA AAR initiative, the EATC encourages other air forces to join with their tanker capabilities to participate in this training event , as it will be an excellent opportunity within Europe to operate with dedicated AAR scenarios embedded in Frisian Flag - a highly recognized fighter exercise . At this moment the Netherlands (KDC-10), Germany (A310) and Italy (KC-767) agreed on sending their tankers to participate.
Recommending Eindhoven Air Base as ideal for tankers to participate in the exercise, the Netherlands approved to use this airfield as a Tanker Forward Operating Base (FOB) during  EART  exercise period, 31 March - 11 April 2014.
Considering the increase of AAR activity and the fact that EATC PNs will introduce new assets with an AAR-capability (A400M and A330 MRTT replacing the aging current tanker assets) into their fleets within the coming years, the EATC’s aim is to further develop its expertise and to consolidate its role in AAR in order to help EATC’s PNs in the best possible way to master the challenging employment of those new assets.