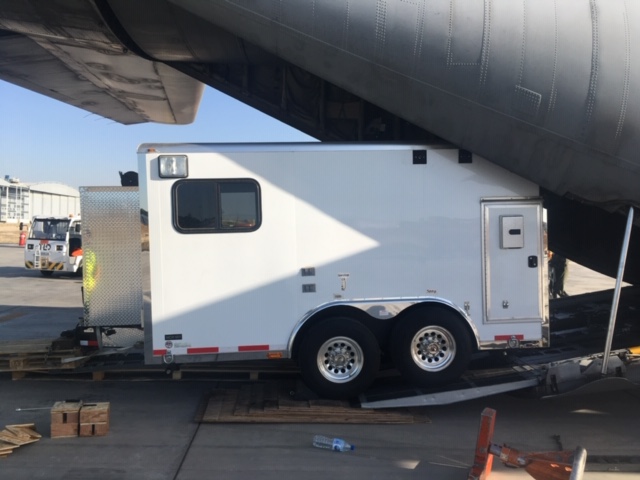 EATC manages the first missions for the multinational MRTT unit ...

The Multinational MRTT Unit or MMU needed to have equipment transported. However the unit’s A330 MRTT aircraft are not yet delivered and so the MMU approached its five member nations1 for support. These turned to EATC requesting EATC to plan, task, command and control two missions on behalf of the MMU.

The first mission took place on 09 October 2019. The Belgian C-130 took off from Melsbroek (Belgium) and picked up equipment in Getafe (Madrid). But what a challenge for the loadmasters ! They had to load a trailer into the C-130 that just fitted very narrowly. So they used a special wooden loading ramp construction and succeeded to load the trailer with just one inch spacing on each side. Thanks only to the extraordinary professional skills and immense patience of the Belgian loadmasters did the C-130 take off with the equipment to Palmdale (USA).

The C-130, tailnumber CH-03, returned back to Melsbroek and ...... was decommissioned! This exceptional mission on behalf of the MMU was the aircraft’s last mission after 47 years in service.

A second mission was executed on 21 October 2019. This time a Dutch KDC-10 returned fuel-test simulation equipment from Spain to Edwards airbase (USA). The aircraft delivered the freight on 23 October. Mission accomplished successfully!

These missions are a perfect example for what EATC stands for : effective air mobility solutions and support to the member nations, or as in this case, support to a multinational entity. They are also a premiere for the MMU nations, who requested for the first time EATC to command and control a mission on behalf of the MMU. Moreover the five nations decided to share the cost via the ATARES mechanism2 according to a predefined sharing key.

The two missions are an operational milestone for the cooperation between the MMU and EATC. However the cooperation between the two entities goes far beyond simple mission management. In the end, the MMU will transfer the authority of the A330 MRTT to EATC. The first aircraft will be delivered in mid-2020 and EATC is already streamlining now its operational processes and procedures with the MMU.

The cooperation between both entities is growing towards a distinguished and meaningful partnership and a prosperous future in the air mobility! … Together we go beyond!

1  The Netherlands, Luxembourg, Germany Belgium and Norway. All, except the latter, are members of EATC.
2  Air Transport & Air-to-air Refuelling and other Exchange of Services
This arrangement facilitates mutual support through the exchange of services without any monetary exchange. ATARES is the main currency used among the EATC and MMU member nations to support each other.