A journey through EATC’s operations manual

EATC’s Operations Manual (OM) is a comprehensive set of ten books governing the flight operations managed by EATC. Each book is meant as an autonomous volume, while combined, the books are interlinked.

The individual books, called subparts, are in different stages of development. Some are finalized and only need to be updated and enhanced on a regular basis. Others are currently about being developed, while a few still need to be engineered. In either case EATC works in close cooperation with the national subject matter aiming at offering a common set of regulations to the air mobility community.

Subpart A (OM-A) : day to day flight operations for the EATC fleet

The latest version of the OM-A was published in September 2021 The basis is the European Common Regulation (EU) 965/2012 (air operations).

The OM-A’s chapter on “Flight Duty Regulation” is of utmost importance to EATC’s planning and tasking experts, applying the operating procedures containing information on mission preparation and airport suitability. The chapter regarding “Dangerous Goods and Weapons” has a direct link to the OM-H (EATC Ground Operations Manual). Other sections are more oriented to the crews and executing agencies, such as “crew composition” or “crew qualification”.

When the OM-A was established, each EATC nation approved the document, but not all sections were applicable to their fleet. As for example, national regulations were applicable for the (former) legacy fleet of the C-160 and C-130H. Since 2010, this fleet has been decommissioned continuously and replaced by state of the art aircraft such as the C130-J, A400M or A330 (MRTT).

One of the latest developments of the OM-A was the introduction of the C130J Binational Air Transport Squadron and the A330 (MRTT) Multinational MRTT Unit. 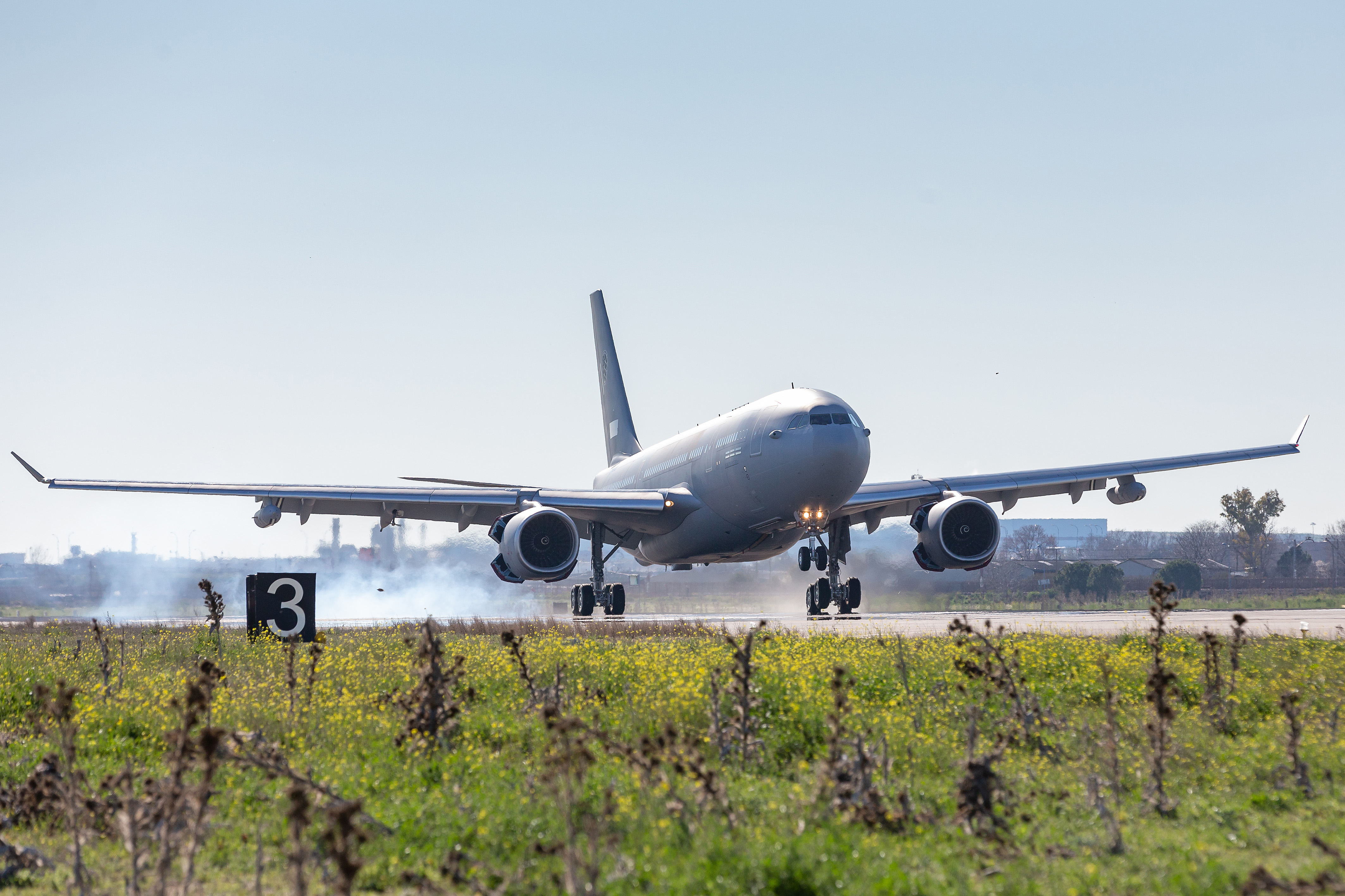 A330 MRTT of the MMU (Multinational Multirole Tanker Transport Unit)

Not without a number of obstacles to overcome…

Before EATC took up its duties in 2010, no overarching common military regulation existed. Each EATC nation regulated the operation of its flying assets on its own. The national regulations were translated at execution level for the use by the crews and mission support personnel. Thus one of the first objectives of the newly established EATC was to have a common flight duty regulation, i.e. the basis for flight planning and control.

The development of this common regulation took about eight months and it was promulgated end of 2011. One of the biggest hurdles was to start from common definitions and ways to measure the limits. These were not standardised among the four EATC founding nations. Moreover two of the nations were using their national language for their aviation documents. This entailed that the nations had not only to accept new definitions and English as the governing language but they also had to train their people accordingly.

Aircraft operating matters are fully in the hands of the executing agencies as these have the specialists in house. Today, considering the many different aircraft configurations, the member nations are sole responsible to keep the documentation up-to-date. Nonetheless, for  common aircraft operated by different nations, such as the A400M, A330 MRTT or C130J, EATC plays a coordinating role and ensures joint concepts.

Subpart C (OM-C) : information on the intended routes and aerodromes

Project to be started.

OM-E describes activities by the executing agencies to ensure the continued airworthiness of the assets assigned to them. OM-E is currently restricted to the only nation that published a national OM-E.

Subpart D (OM-D) : training together with one set of standard

EATC’s portfolio features a sizeable fleet of common aircraft, such as the A400M, C-130J or the A330. To maximize this commonality, EATC ultimately aims to have qualified crew members exchanged between the nations. A prerequisite to operate aircraft in the same way is to train the air crews following a common set of standard procedures.

The OM-D aims at the latter: ensure that aircrews (pilots and loadmasters) are trained along the same standards. The manual is divided in two parts:

Part one regards the logistical training and defines how crew members get qualified to operate under OM-A (day-to-day flight operations).

Part two focusses on the tactical training and defines how crew members get qualified to operate under OM-T  (theatre operations). 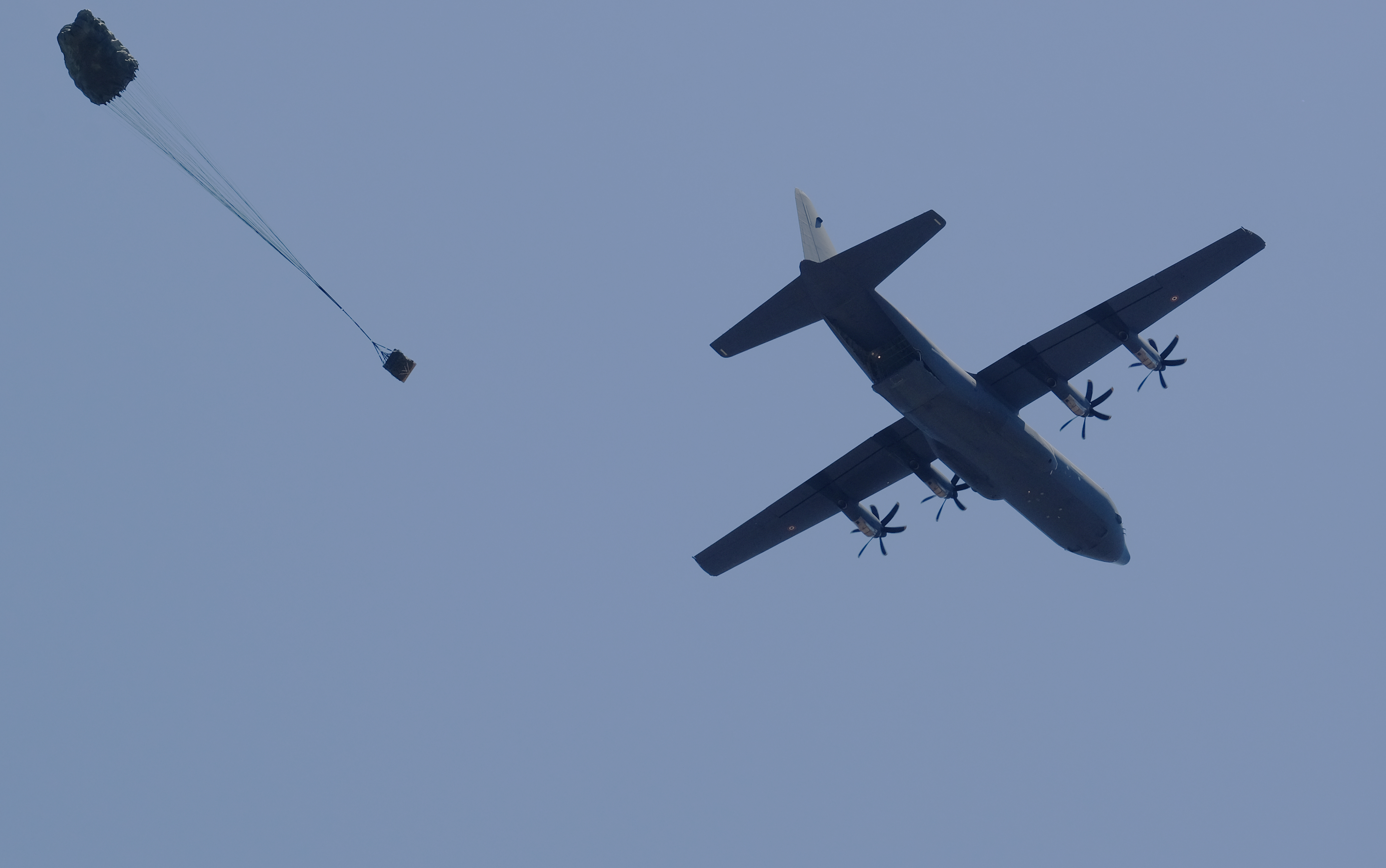 In 2017, EATC published the OM-D #A400M training and in 2021 the OM-D #C-130. The Manuals are reviewed on a regularly basis in coordination with standardisation experts of the EATC nations.

The EGOM is unique in the air business, as not covered by traditional civilian regulations. In fact ground handling is not an integral part of a civilian OM. EATC however decided to integrate the EGOM into the OM, as ground handling, on the same level as flying, is part of the effective and efficient military air transport EATC is aiming for.

The EGOM is based on the IATA Ground Operations Manual and includes the IATA Dangerous Goods Regulations and the NATO AMovP-6 (Allied Multi-modal Transportation of Dangerous Goods). The overall objective is to ensure that all users (load preparation units, handling personnel, crewmembers, passengers,…) work according to the same rules  with the same documents. As cargo is received, inspected, prepared and subsequently loaded for air transport at any main operation base in one of the member nations, the national handling units need to handle processes for all EATC aircraft without any further guidance - neither from the cargo sending nation nor from the nation conducting the mission. The same goes for passengers. This is why the  EGOM offers chapters on passenger, baggage and cargo handling, but also on aircraft handling, airside security, and load control.

The first EGOM edition was launched in 2013. The book is updated on a yearly basis and published on EATC’s webpage. It is one of EATC’s core documents as it ensures that payload movement as requested by the nation is effectively moved from the airport of departure to airport of arrival. 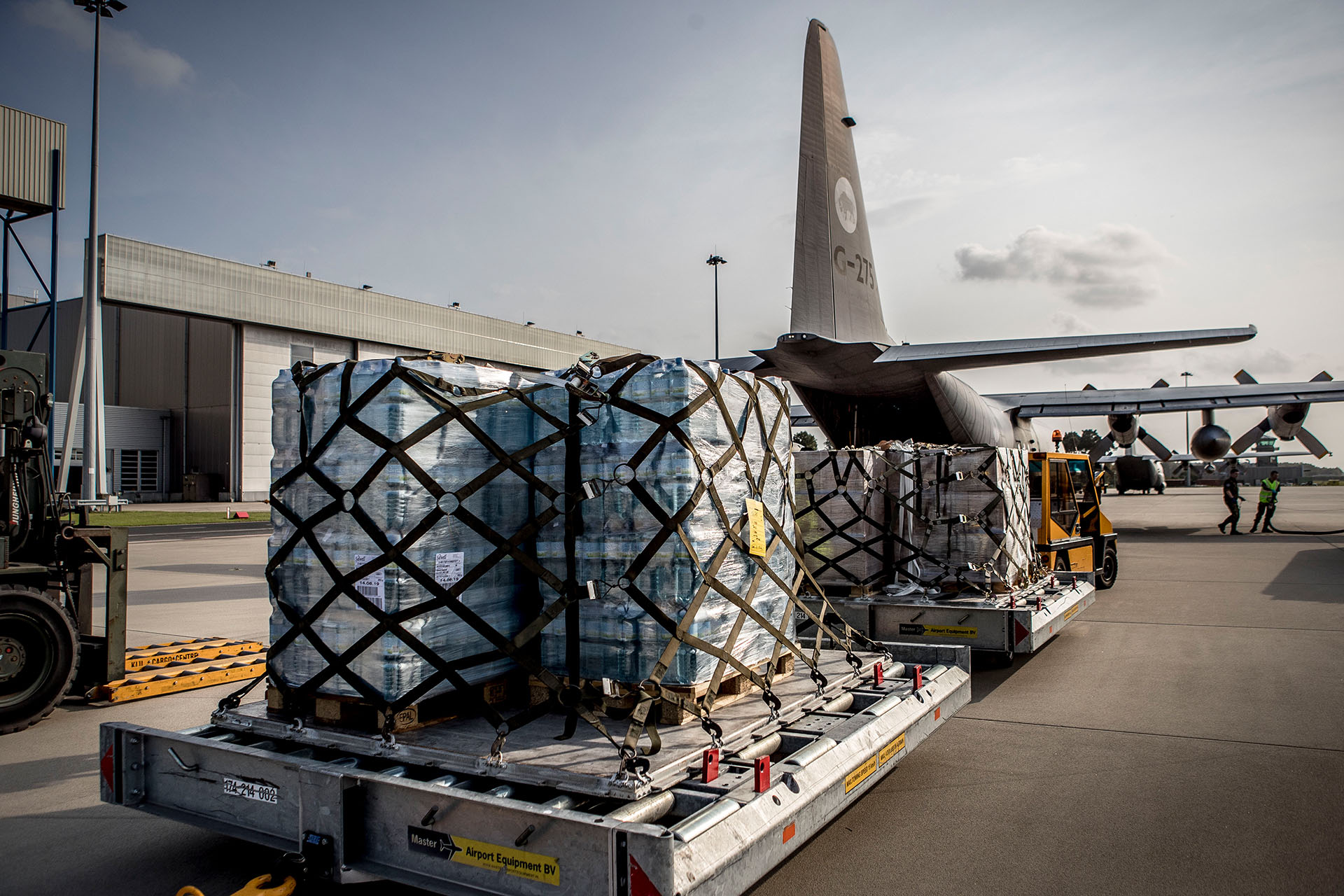 The OM-O introduces a common approach to “Operational Risk Management” (ORM). Although ORM is a national responsibility, EATC needs to be aware of the national processes as missions are conducted under EATC’s authority. This is important, among others, in order to allow an early warning if, during the mission planning stages, the risk is increasing beyond a certain level. The taskers can then adjust the mission profile. On the other hand, risk identification is the first step of any ORM process and one that is common to all nations. With that in mind, the common way of OM-O allows for easier exchange between the nations.

OM-O is always under revision, as part of a cycle process as ORM is itself. Thanks to the feedback received from our users, Employment Branch is able to improve the process of risk assessment in air operations. Also this manual allows EATC to increase ORM mindset among its personnel as well among the PN’s.

Flying within an established operational environment, with different or higher mission demands, and consequently acceptable risks, is different to the regular air transport tasks. This is why OM-T complements the operational manual considering specific tactical procedures, and if needed, replaces peacetime regulations laid down the subpart A “day to day flight operations”. 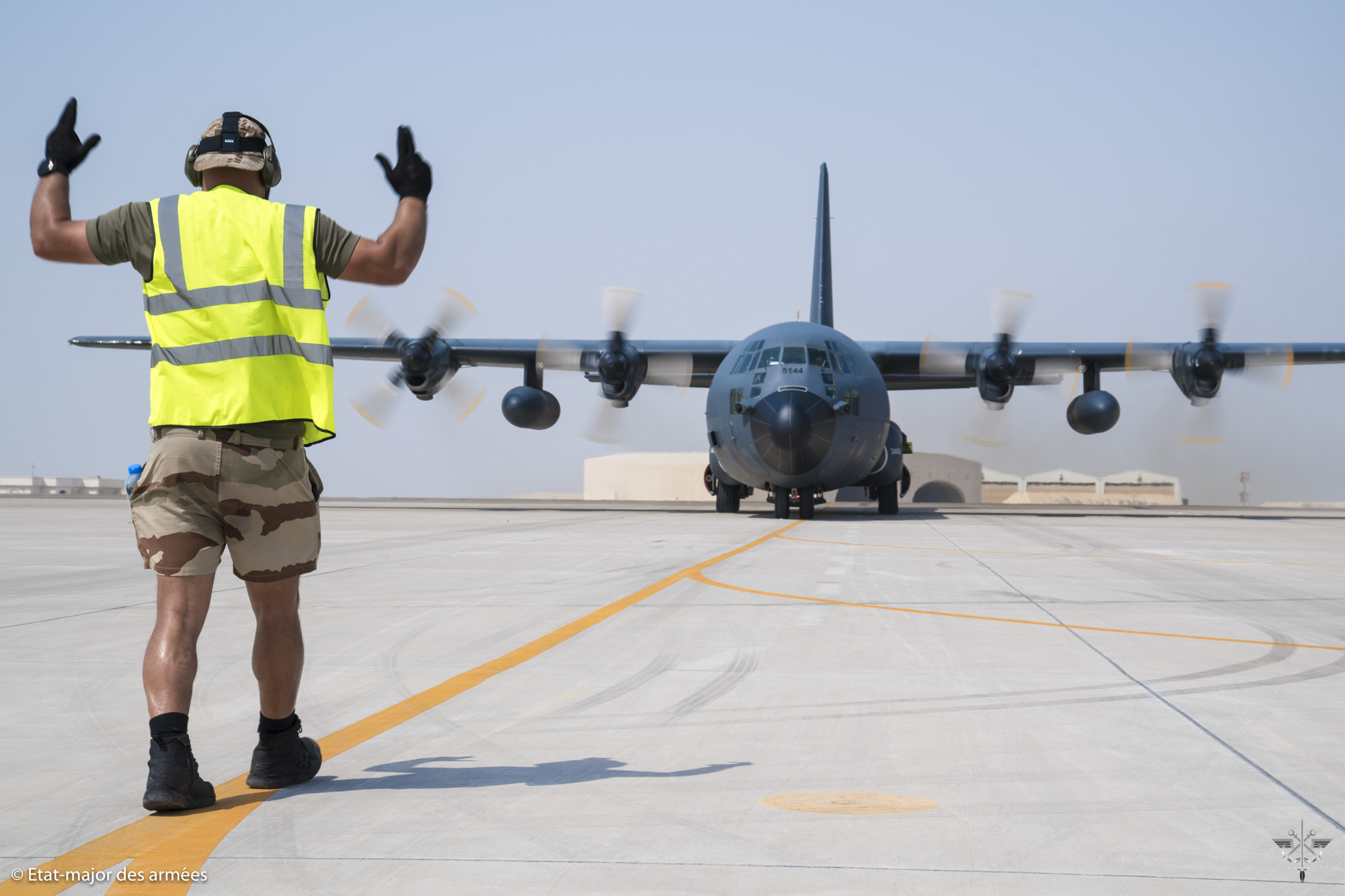 OM-K will be published in 2022. The handbook harmonizes the different national air-to-air refuelling processes and documents. The overall objective is to improve interoperability during the planning, tasking and execution of trail missions executed under the operational authority of EATC. It also offers a framework to partner nations to execute common AAR missions.

OM-F is a long term project, still to be started. This subpart could contain all commonly executed tasks for preparing a flight, starting from the A400M Performance Engineering. At a later time, flight dispatch, electronic flight bag management, the use of flight planning tools, flight following and communication will be included.