As a recognised centre of expertise in air transport, aeromedical evacuation and air-to-air refuelling, EATC draws on strong cooperation with other European stakeholders in the air mobility domain. In 2018, EATC confirmed its willingness to expand cooperative efforts and set up further partnerships to support future multinational military operations.

Following the signature of a letter of intent in May 2016, EATC and EUMS (European Union Military Staff) decided to develop working partnerships in particular in the domain of aeromedical evacuation. Both organisations conclude to enhance the cooperative effort regarding the advice and assessment for strategic aeromedical evacuation.

The EUMS lacks this specific aeromedical expertise, which is a scarce resource in general. This is why EATC and the EUMS agreed to initiate a close cooperation on EATC’s well-recognized expert knowledge in this domain. Once the member nations have agreed to the modalities of the cooperation, the enhanced partnership will come into effect. The expert medical team will then offer on specific occasion a 24/7/365 aeromedical evacuation advice and assessment through EUMS.

This is multinational best practice at its finest!

Joint optimisation and development of the A400M capability. between EATC, EDA and OCCAR-EA.

In January 2018, EATC, EDA and OCCAR-EA signed a letter of intent concerning the joint optimisation and development of the A400M capability. The three partners intend to enhance synergies and avoid duplication of efforts.

The letter of intent was translated into a cooperative roadmap to ensure the most cost effective use of the A400M aircraft, including training centres, air-to-air refuelling pairing clearance, cross maintenance and cross loading issues. Moreover it explores possibilities to efficiently utilise future air transport over-capacities and jointly facilitates the optimisation of the A400M capability. 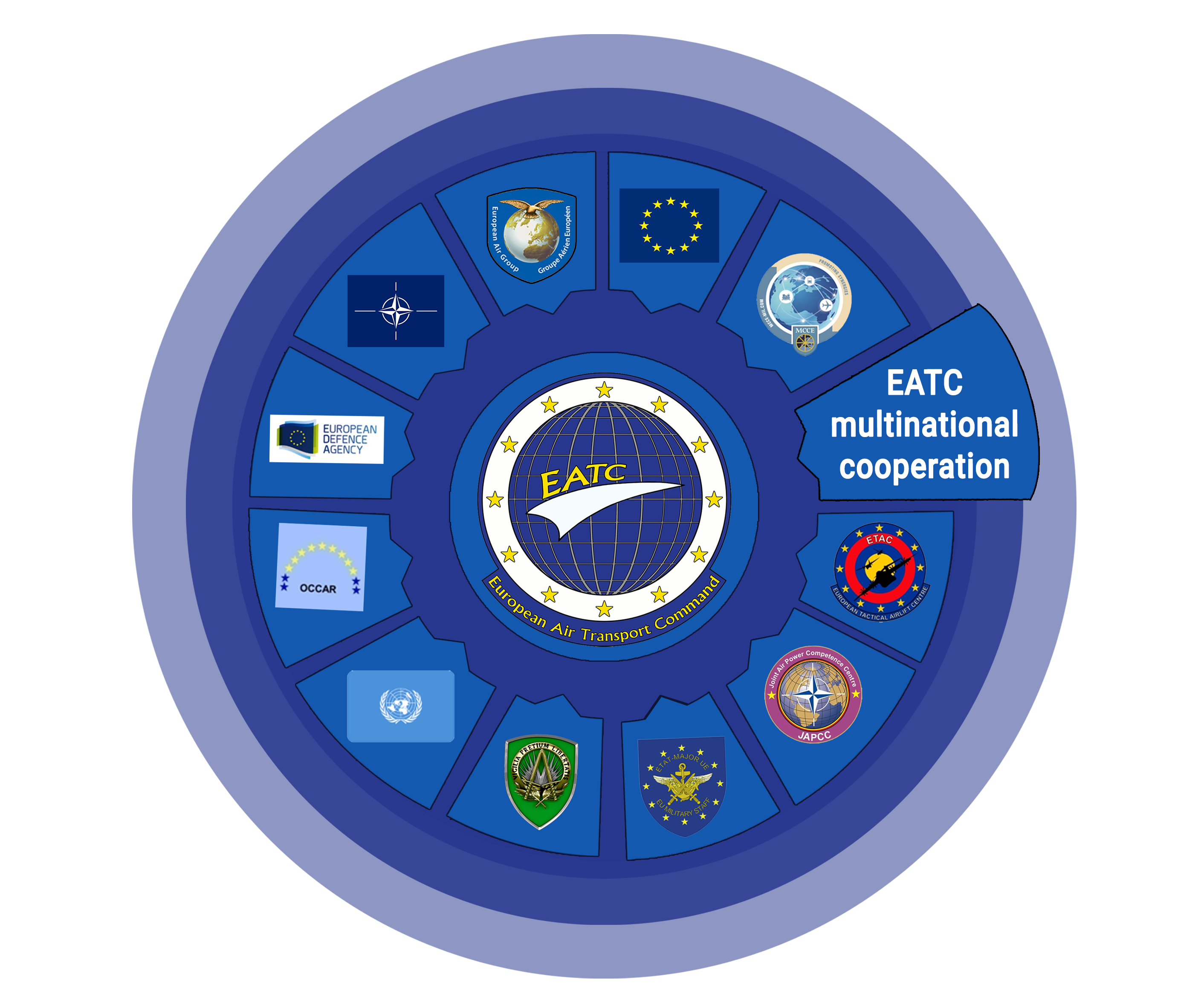 The who is who of the multinational cooperation!

EATC is closely cooperating with the multinational MRTT unit (MMU) and the French-German binational C-130J unit*.

EATC and the MMU decided to work together in the operational and functional domain. They formalized their cooperation through an exchange of letters. The aim is to enhance synergies and interoperability during the ramp-up of the fleet and the joint operational use of the A330 MRTT. The MMU will operate from Eindhoven airbase and Cologne-Bonn airport as of May 2020, while delegating the operational command and control authority of their eight aircraft to the EATC. Four EATC member nations - Belgium, Germany, Luxembourg, the Netherlands – and one non-member nation, Norway, already joined the MRTT programme. Another EATC member nation, France, also operates A330 MRTTs. EATC will coordinate the joint efforts to foster harmonisation and interoperability between all partners.

EATC also exchanged letters to officialise the cooperation with the French-German binational C-130J unit*. EATC will support dedicated working groups with subject matter experts with the aim to  integrate the French-German C-130J fleet into EATC’s documents and procedures. Italy, who already operates this specific aircraft for many years, will offer their expertise through EATC.

These cooperative efforts ensure the most cost effective use of an aircraft and enable its successful multinational operation!

* The cooperation with the French-German C-130J unit runs currently through the unit’s French-German steering board. The unit will be officially inaugurated in 2021.